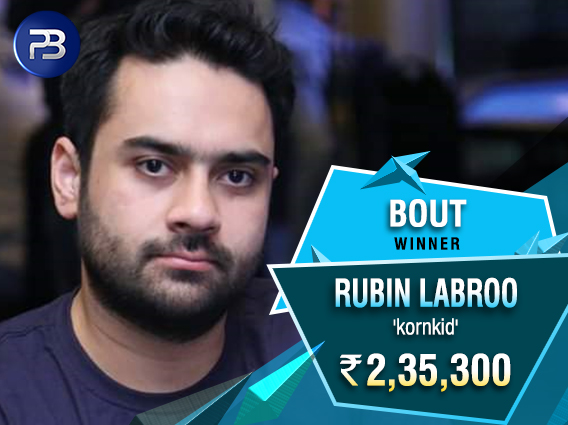 
Featured tournaments take place daily on the top poker websites in India, with PokerBaazi being no exception. Yesterday being a Monday, we had The Bout INR 10 Lakh GTD being contested on their platform and once again, it was an intensely fought tournament, lasting nearly 7 hours.

The tournament kicked off at 8pm last night and a whole lot of pros were part of the action, with the buy-in set at INR 4,400 and 230 entries joining by the end of the registration period. The eventual winner was Rubin Labroo who is widely known across the industry by his username ‘kornkid’.

For a player like Labroo, winning becomes a habit. It becomes part of a routine. Boring almost. In the last year and more, Labroo has won countless number of titles across all major online poker platforms and he just added another one to his trophy cabinet, in this tournament which ended at 2:48am this morning.

Labroo seems to follow the ‘Eat, Sleep, Grind, Repeat’ formula very well and this latest victory is even more special since he also won the same tournament last week. Next Monday, he’ll be very determined to play some more good poker and complete a hat-trick of Bout titles on PokerBaazi.

Last night, he beat a number of pros and PokerBaazi regulars along the way, before outlasting ‘druglord’ in heads-up. For the second Monday night in a row, Labroo would’ve been delighted as he banked another top prize of INR 2,35,300 for this effort. Just a couple of weeks back, he also bagged top honours on Adda52’s Sunday, shipping his first ever Mega Suits title, so you can be sure he’s on a good run at this moment.

For all updates on the top poker offerings in India and around the world, keep following GutshotMagazine.com.