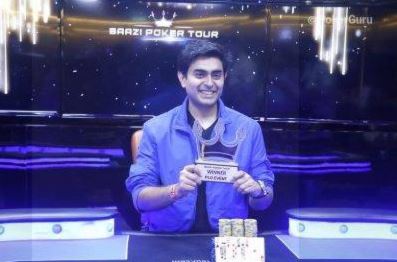 
Finally, we’ve reached the end of a fairly successful Baazi Poker Tour (BPT) on board Casino Pride 2 in Goa. We’ve had 5 tournaments in all and yesterday, three of them came to an end including the 50k Main Event which saw Bharat Kumar emerging victorious after a 4-way deal. The 20k Bounty Event went to Gokul Krishna, both earning their maiden live titles.

The third and final tournament to come to an end on the night was the 20k PLO Event which ended past 5am this morning, with Rohan Dhawan coming out on top as the winner. He bested a tough field of 156 entries including Ankit Jajodia in heads-up to win the BPT title and also INR 7,55,300 in hard cash.

It was Level 20 (Blinds 15,000/30,000) when the tournament came to an end and it was only a matter of time as Jajodia entered heads-up with a very short stack, 16.9 million against 6.5 million chips. Heads-up only lasted a few hands and eventually, Jajodia lost Aces and Threes to Aces and Kings in the final hand.

Among those to cash on the final table were many known names including Nishant Sharma, who finished 34th in the WSOP Main Event last year; there was Goan local boy Myron Pereira in the mix who eventually finished 5th while PokerDangal co-founder Karan Gandhi came 6th and the very popular Vikram ‘Lungi’ Kumar came 7th!

This was the final tournament to wrap up at the Baazi Poker Tour (BPT) but there’s plenty of more action for you as the World Poker Tour (WPT) also kicks off today in Goa. Stay tuned to GutshotMagazine.com for all the latest updates!