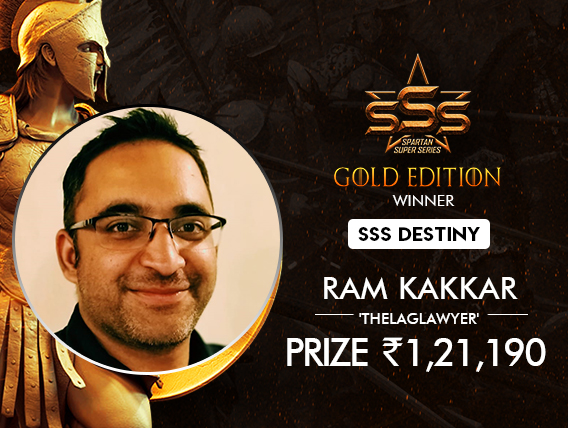 
For the first time ever, Spartan Poker launched the Spartan Super Series (SSS) Gold Edition wherein there are tournaments for everyone, with buy-ins accommodating the smaller bankroll players as well as the top shots of the industry. Yesterday was Day 1 of this series and the featured tournament, SSS Event #6 Destiny INR 25 Lakh GTD, was shipped by the popular face of Sahil Mahboobani. Apart from Destiny, there were seven other tournaments scheduled for the day, and we’ve put up a small summary of all of these tournaments. Keep reading…

This tournament was the first of the day and it had a buy-in of just INR 77 attached to it. Of course, it attracted a strong field of 143 players and along with re-buys and add-ons, the guarantee was passed comfortably, created a prize pool of INR 39k+. The top 20 players shared the spoils with a min-cash of INR 523 and the player to take away top honours was ‘Akkybaba’ who beat ‘ks6161’ in heads-up to win INR 9,374 in prize money. The last hand was a PFAI where Akkybaba’s Pocket Tens held against his opponent’s Pocket Sixes, with the latter taking away INR 6,367 for finishing second.

With a buy-in of INR 110, this tournament also turned out to be a big success, attracting 198 unique players to take the prize pool to INR 41,500. The top 27 spots shared this prize pool with INR 415 being the min-cash. The winner emerging from this field was ‘Babalos’ who took away the top prize of INR 9,192 and told Gutshot he would like to stay anonymous until he gets a bigger win in the future. In heads-up, he outlasted ‘pagal27’ who won INR 6,204 for finishing second, with pocket Sixes beating Kc 4s in a pre-flop all-in situation.

The buy-in moved up to INR 440 for the third tournament of the day and a known name in ‘allinle’ emerged victorious here. He contested among a field of 275 unique players from which the top 39 players took away a minimum prize of INR 1,380 each. Rana beat the entire field to get himself a decent bankroll addition of INR 40,100 after he beat ‘bojenifuri’ in heads-up, who won INR 26,600 as runner-up prize. The final hand saw Rana’s pocket Kings improve to Three of a Kind of the flop itself, beating his opponent’s high card A.

INR 880 was the buy-in decided for the fourth tournament, which was the highest of the day thus far. Naturally, some of the better players were a part of this 182-player field as the top 27 shared the spoils with prizes of at least INR 3,000 each. However, the prizes reserved for the top few were much higher and the player to emerge victorious from this field ended up being ‘Wheniscomingmytime1991’ who won INR 66,450 in prize money which turned out to be the biggest cash prize of the day thus far. He hit a K-high flush in the final hand to outlast ‘Chkluck’ in heads-up, who bagged a runner-up prize of INR 44,850.

164 players registered to the fifth tournament of the day. With a buy-in of INR 550, the guarantee was missed by a small margin and the top 23 players were paid out with a minimum of INR 2,320 each. ‘coconuts’ was the eventual champion who hit a pair of Aces on the flop of the final hand to win the tournament and INR 46,500 in prize money. He outlasted Ashish Kaushik aka ‘mmonas’ in heads-up, a player who has won a few titles on Spartan in the past. Here, Kaushik had to settle for INR 31,500 for finishing second.

‘JasonBourne’ is one name you may have heard on a regular basis if you follow high-stakes tournaments on Spartan Poker. The player wishes to stay anonymous, but he has made a habit of winning top tournaments with big buy-ins. Here, the PLO Event had a buy-in of INR 11,000 and a total of 123 entries registered to the event from which only the top 13 players won a cash prize of INR 30,750. Some known players were in the mix, but none were able to get past Jason Bourne on the night. For his efforts, he added INR 3,93,750 to his poker bankroll after he beat ‘$ubZero’ with a straight over Two Pairs in the final hand. $ubZero collected INR 2,76,000 from the prize pool for finishing second.

INR 1,650 was the buy-in set for the final event of SSS Day 1 and a field of 382 entries registered to smash the advertised guarantee and create a new prize pool of INR 5.73 Lakh. This meant more prizes for everyone and the top 31 spots on the night shared these prizes with a min-cash of INR 5,042 each. The winner turned out to be a well-known player, Ram Kakkar aka ‘TheLagLawyer’, who is indeed a lawyer by profession. He has quite a few previous titles across various platforms and he added another one to his collection last night, banking INR 1,21,190 for the win. He beat ‘fishlover’ in heads-up who won INR 81,595 for finishing second.

For all updates on the rest of the SSS Gold Edition series, keep following GutshotMagazine.com.