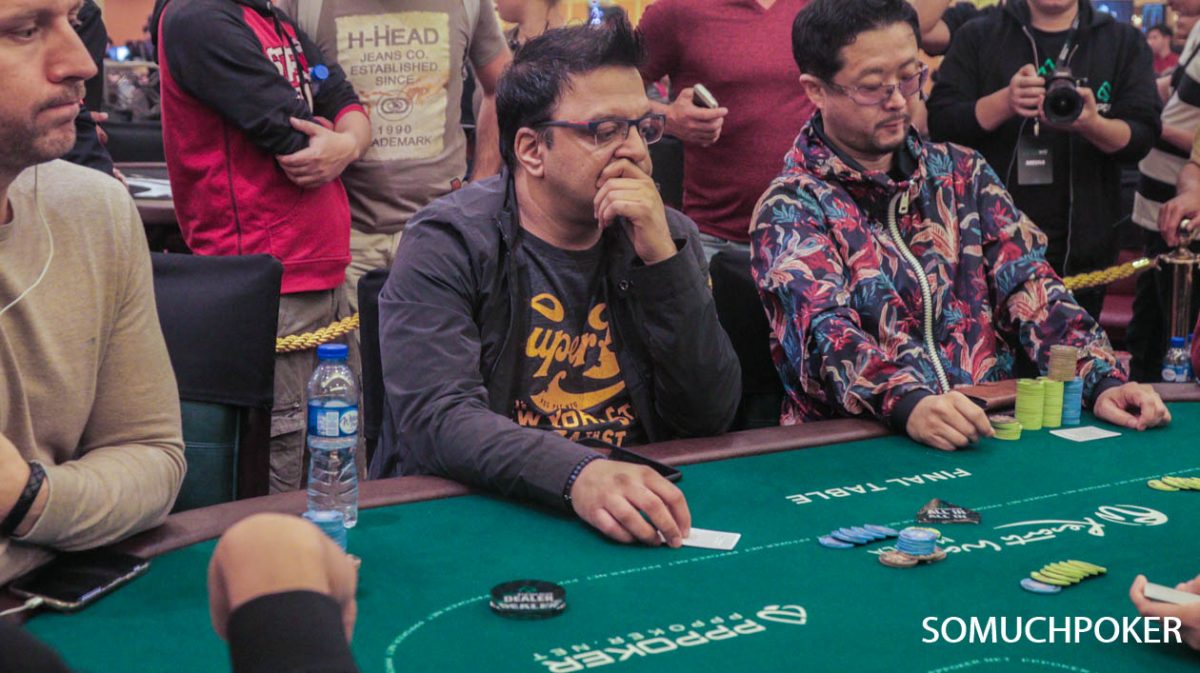 
Yesterday was a fantastic day for India’s Rajeev Kanjani, who has been busy grinding at the 2019 PPPoker World Championship (PPWC) in Manila. It was Day 2 of the PHP 55,000 Main Event and Kanjani was one of six Indians who hit the tables at the start of the day.

Two busted before the money, while Abhinav Iyer, Kalyan Chakravarthy and Aditya Sushant hit the rail after the pay-outs began. As for Kanjani, he was the only Indian among the final 16 players in the Main Event that bagged their chips to return on Day 3. When we spoke to him yesterday, he mentioned how he wants Day 3 to be an even better day.

He kept up to that promise today, going on to make the 10-handed Final Table of the tournament at Resorts World Manila. This was a serious accomplishment from him, competing with some of Asia’s top poker players including WSOP bracelet winner Mike Takayama and Lester Edoc, both of whom have major cashes all over the world.

In the first session of play today on Day 3, we saw 5 quick eliminations, which brought us to the final 11 players in contention at the first break at 2pm local time. A couple of hands after the break, the shortest stacked Mark Amparo was shown the door by Richard Marquez, who then went on to become the chip leader among the final 10 players.

Counts at that point:

Soon later, two more eliminations took place on the FT, in Day 1C chip leader Denis Cheremisin and Ken Foo Hsien Loong, falling out in 10th and 9th place respectively. Kanjani was looking very composed even though there were some sharks on the table. However, he suffered a bad beat with KQ vs K2, both players hitting a pair on the K-high flop, but Kanjani’s opponent rivering a 2.

He took a big hit just when he was looking very comfortable, dropping to the shortest stacked. From there, it wasn’t too long before he was eliminated, ending a fantastic run in the PPWC Main Event. He cashed in 8th place for PHP 446,200 (~INR 6.1 Lakh) after QJc lost to AQs.

Play was scheduled to end after the final six was arrived at, and that’s exactly what happened. The last elimination of the day was that of Markus Garberg, who fell out in 7th place after his Tens ran into Richard Marquez’s Queens and the former didn’t get any assistance on the board. Marquez then ended as the chip leader.

The final six players will only be looking out for that top prize of PHP 4,850,000 (~INR 66+ Lakh). Until we reach the end, keep reading GutshotMagazine.com for all updates on the PPWC 2019 Main Event.