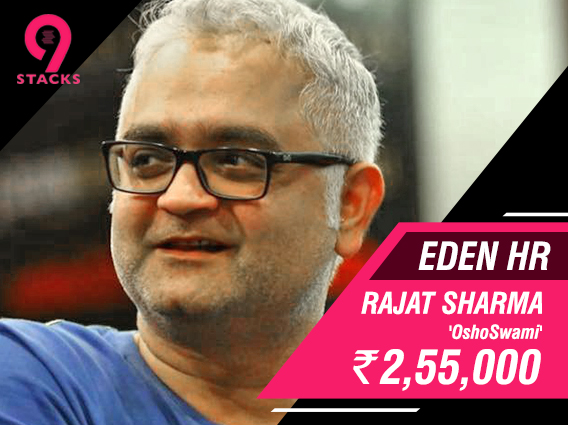 
It was just two weeks ago that Rajat Sharma made headlines by winning PokerStars India Highroller for a good ~INR 2.42 Lakhs. He secured this victory playing on the platform under ’sharabikebabi’. Looks like his thirst wasn’t satiated and he went to 9stacks yesterday and won the feature tournament for the day there too.

Sharma, playing under ‘Oshoswami’ on 9stacks, shipped the tournament for INR 2,55,000, beating Sandeep Varma aka ‘effuno’ in heads-up. Rounding up the top 3 was regular Shravan Chhabria aka ‘Kissmyace’ for INR 1,13,220.  The runner-up Varma took home INR 1,68,300 for his finish.

Sharma has been in the game since as far as we can remember. He has numerous title-finishes and deep runs to his name on virtual felts. Among his recent wins include Adda52 Mega Suits which he won this January for a sizeable INR 7.05 Lakhs. He was among the Destiny 7.0 SnG finalists on Spartan, but it ultimately was Sriharasha Doddapaneni who won the package.

Coming to the platform itself, 9stacks is offering its player-base with a good line-up every day. Their popular Prime Time @ 8 promotion was replaced with cricket-themed tournaments and those have been doing great too. They also released a poker rap song called ‘Hustle Hai’ recently which you can check here.