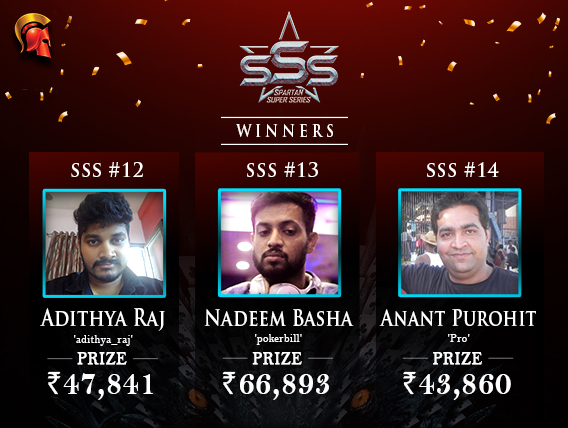 
Yesterday was the third day of the ongoing Spartan Super Series (SSS) on Spartan Poker, where INR 3+ crore has been guaranteed between 10-14 April 2019. A total of five tournaments were scheduled yesterday including the massive INR 50 Lakh GTD Elite, which was won by ‘pokerkilll’. Among the known online grinders who won titles yesterday were Anant Purohit, Nadeem Basha, and Adithya Raj both making small bankroll additions. Keep reading for a complete summary of SSS Day 3…

With a buy-in of INR 660, the first tournament of the day saw the guarantee being passed as 172 unique players registered to play. The top 31 players received a pay-out of INR 1,990 each but the players to end up most profitable in the tournament was Adithya Raj aka ‘adithya_raj’ who took home the biggest pay-check of INR 47,841. In the final hand, Raj and heads-up opponent ‘Sadesai’ both hit a pair on the flop, but the former’s Kings was better than his opponent’s Jacks. Sadesai took away the runner-up prize of INR 32,210.

“Delighted to ship an SSS title, my biggest ever win on Spartan. Patience in waiting for the right hands, courage in handling bad beats and acclimatizing with the table instantly set my game apart yesterday. I’m very happy that my efforts in improving my game are paying off. I’m looking forward to shipping even bigger ones. I would also like to thank Gutshot Magazine for providing me this platform. Thank you,” said Raj when we contacted him.

The buy-in for the second tournament of SSS Day 3 rose to INR 1,100 and once again, the guarantee was slightly crossed with 134 unique players joining. Nadeem Basha aka ‘pokerbill’ powered through this field to claim the title and the top prize of INR 66,893 after he beat ‘AlwaysSmile’ in heads-up. Basha’s Jacks and Sixes beat his opponent’s Sixes and Fives in the final hand, with the latter taking away a decent prize of INR 45,149.

Another tournament with the buy-in of INR 1,100 and this time, it was in the OFC format. Anant Purohit aka ‘Pro’ is a regular grinder on Spartan Poker and has had several titles on this platform in the past. Here, he added an OFC title to his list of achievements, taking home the top prize of INR 43,860. In heads-up, he outlasted ‘Nomercy3801’ who had to settle for the runner-up of INR 25,800. When we contacted the winner, he seemed thrilled about his win and said, “OFC is one of my favourite games. I loved the tourney and was very excited about it when I initially saw that there is going to be an OFC tourney. I’m happy to win it.”

This was one of the main feature tournaments of the day for SSS Day 3, a newer offering by Spartan every Friday night. With a buy-in of INR 3,300, a total field of 410 entries joined the tournament and the winner turned out to be ‘Yea_gl_gg’, who has won on Spartan before but prefers to stay anonymous. The player outlasted the field and after a grind of nearly 7 hours, he won the title and INR 2,60,145 in hard cash. The final hand saw him beating ‘Psycorp1’ after he hit Aces and Twos to beat his opponent’s pair of Twos. Psycorp1 won INR 1,75,152 for finishing second.

This is one tournament everyone has had their eyes on since a while. The second biggest guarantee of the SSS series, Elite Highroller had a huge buy-in of INR 27,500 and from this itself, you can know that those who participate are among the best in the business. However, a big buy-in also guarantees big pay-outs and ‘pokerkill’ was the player who emerged victorious in this tournament, beating 202 entries to take away a massive pay-out of INR 12.12 Lakh. The guarantee was passed by a couple of entries and it was one serious grind last night, beginning at 9pm and ending at 4:55am this morning, after nearly 8 hours. pokerkill beat ‘RUMMYQUEEN’ in heads-up, with the latter claiming the runner-up prize of INR 8.23 Lakh. One of India’s best, Aditya Sushant aka ‘SuperuSer’ was also in the mix, finishing 5th for INR 3.6 Lakh.

For all updates on the Spartan Super Series, keep following GutshotMagazine.com.