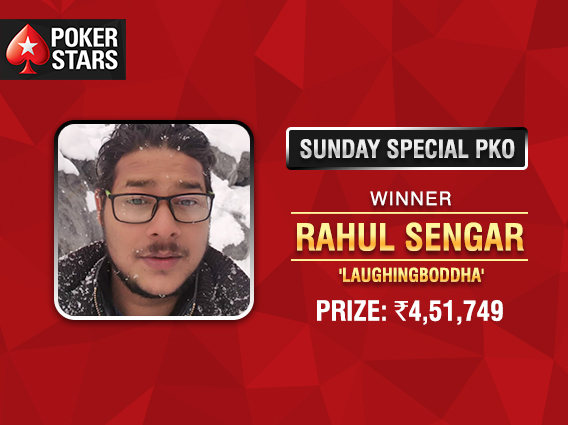 
It was another action-packed Sunday on the PokerStars India platform, where players in huge numbers signed-up to their offerings on the work-off day. The biggest tournament that happened yesterday on PokerStars India was the Sunday Special PKO INR 25 Lakhs GTD. The tournament received a big boost in guarantee to celebrate Nawazuddin Siddiqui joining as the ambassador of the platform.

The Sunday Special PKO is a Progressive Knock-Out format where players earn a certain bounty amount when they eliminate someone from the table. The tournament yesterday had a buy-in of INR 5,500 and attracted 424 entries (including 173 re-entries) in all. INR 2.5k of the buy-in went to each player’s starting bounty. The tournament began at 7 pm last evening and was in the books by 3.44 am today.

The long grind of almost 9 hours produced the winner to be Rahul Sengar aka ‘LaughingBoddha’, taking home INR 2,37,890 as his bounty and INR 2,13,859 as the tournament cash-prize after making a 4-way deal with ‘MuscariAs’, ‘muhmelele’ and ‘TheGrinder333’. Sengar won a total of INR 4,51,749 yesterday.

The winner, Sengar, is relatively a newcomer to the scene but has made a few cashes in the past, including winning a trip to Bulgaria on PokerYaar. He is a budding player and someone like him earning this amount is impressive. He will hope to make the best use of this welcome bankroll addition by signing up for more tournaments in coming months.

PokerStars India gives plenty of opportunities through the week for players to cash big. Just a couple of days ago PokerStars Team Pro Aditya Agarwal won the PokerStars Highroller. Every week, a lot of budding players play and cash big on their site and some of the tournament structures and formats have witnessed good popularity among the community.

Keep reading GutshotMagazine.com for more such daily tournament results as well as for general poker news from around the world.