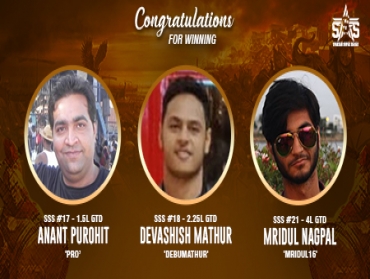 
The cash-rich Spartan Super Series (SSS) is always one of the most popular tournament series offerings in India. Hosted by Spartan Poker every now and then, SSS was alive and kicking again, this time scheduled between 13-17 February, with Day 4 being played out yesterday and a total of five tournaments taking place.

It was a Saturday night, a day that most of the poker players would take some time out to party rather than sitting home and grinding. However, we still saw massive fields taking part. Apart from Zarvan Tumboli winning the SSS Daredevil tournament, we had four other side events hosted yesterday, with varying buy-ins and guarantees. Keep reading for a roundup of SSS Day 4… 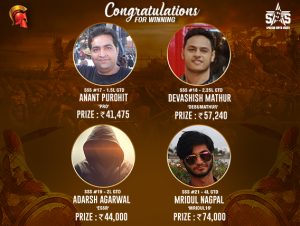 Set at a buy-in of INR 550, the first tournament of SSS Day 4 attracted a field of 226 unique players, taking the prize pool almost up to INR 2 Lakh, which was then shared among the top 30 players with a minimum cash of INR 1,481. Topping this field and taking away the top prize of INR 41,475 for shipping the tournament was Anant Purohit, a Spartan Poker regular who plays under the screen name ‘Pro’. He powered through a competitive field, eventually beating ‘alpha07’ in heads-up, where a PFAI situation saw the board striking a pair of fours and Purohit winning with higher kicker, Queen. His opponent won INR 29,032 for finishing second.

The second tournament of the day had a higher buy-in of INR 990 but a higher guarantee as well, which went on to be increased even further to INR 2.38 Lakh due to a decent participation from 152 unique players. This prize pool was shared by 21 players with the min-cash set at INR 2,981, but Devashish Mathur aka ‘debumathur’ had eyes only for the top prize last night, which he ended up winning eventually. He banked INR 57,240 for winning the tournament after he managed to get past ‘Tarsh001’ in heads-up, who was awarded INR 38,756 for finishing second. In the final hand, Mathur was way ahead in chips and won with Aces and Sevens over a pair of Queens after the players went all-in pre-flop.

This was the last tournament of the night, scheduled after SSS Daredevil took place. With a buy-in of INR 550, a total field of 362 players signed up to the tournament and the prize pool was eventually shared among the top 54 of them, with the min-cash set at INR 1,800. At the end of the night, Mridul Nagpal aka ‘mridul16’ ended as champion, taking away INR 74,000 in prize money after beating ‘Radhe2015’ in heads-up, with the later winning INR 53,400 for finishing second. The last hand was a pre-flop all-in where Nagpal hit a pair of Jacks on the flop.

Today is the final day of the Spartan Super Series and you can stay tuned to GutshotMagazine.com for all updates on the same.