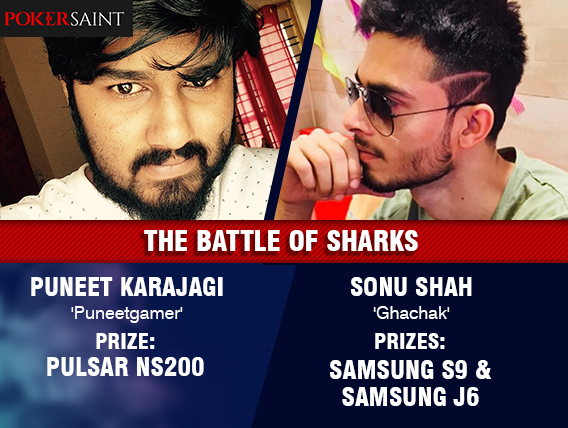 
PokerSaint recently concluded their cash promotion called ‘The Battle of Sharks’ which had some staggering prizes like Benelli, Yamaha sports bikes and cars. The platform is a up and coming in the Indian poker space and especially known for its cash game promotions. They recently announced their newest offering ‘Soldiers of Fortune’ which also has some exciting prizes lined up.

The Battle of Sharks promotion garnered a lot of players and cash table experts to the virtual felts on PokerSaint and awarded the winners with some exclusive prizes like high-end sports bikes, smartphones, cars, and other gadgets.

Among the winners included Puneet Karajagi aka ‘Puneetgamer’ who played some amazing cash tables and won the Gold VIP race leaderboard and won an awesome Bajaj Pulsar NS200 as the first-place prize with the highest number of points.

Karajagi has an impressive history with PokerSaint. He won multiple bikes, smartphones and other gifts over the course of the past 8-9 months on the platform. He recently won KTM Duke 125 in Days of Fire and Ice promotion. He has now bagged a total of 4 bikes playing on PokerSaint, winning RE Thunderbird twice, first in Wars of the First Men I and II promotions.

Another winner on PokerSaint’s Sharks promo was Ankit Singh aka ‘Lecter’ who finished 2nd in the Gold race and earned a brand-new Bajaj Pulsar 135 LS. The next leaderboard was the Silver VIP Race and and the player to top this was Sonu Shah aka ‘Ghachak’ who earned a top-of-the-line smartphone Samsung S9.

Shah didn’t just win S9, he shipped the next leaderboard, Bronze VIP race too and won another Samsung phone, this time the J6. These concluded promotions have seen PokerSaint’s userbase grow to a great extent. They have done what they could to offer some best cash games in the scene and now have borne fruits.

Keep reading GutshotMagazine.com for more such promotion results and for general poker news from around the world.