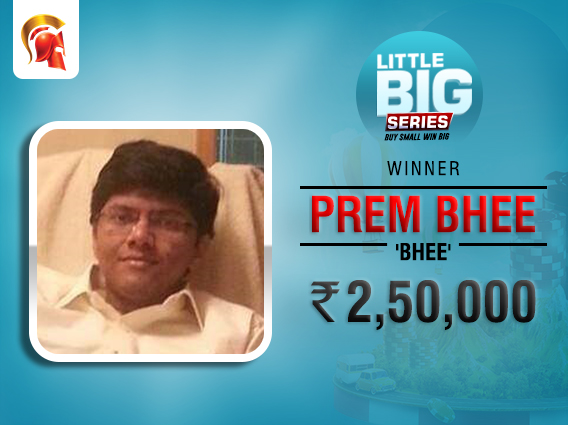 The Little Big Series (LBS) is famous for having extremely low buy-ins that can be converted into big wins on The Spartan Poker. The monthly tournament series is a very popular one and yesterday, we reached the end of another LBS series on Spartan, with 6 events including the Main Event concluding yesterday.

While five side events were lined up for the day, everyone would’ve had their eyes on the Main Event, getting to be a part of the INR 10 lakh GTD prize pool for a buy-in of INR 1,100. Eventually, 873 entries registered to this 6pm-start tournament and from them, only the top 70 shared the money, with a minimum cash prize of INR 3,500.

It was a long grind of over 7 hours that came to an end at 1:20am this morning, when Prem Bhee aka ‘Bhee’ emerged victorious from this vast field. He beat ‘Immortal killerr’ in heads-up and took away the top prize of INR 2,50,000 after another pre-flop all-in situation in the final hand of the tournament.

It was quite an achievement braving through a tough field to take down this tournament on Spartan and obviously, Bhee would be over the moon with the win. The player, however, didn’t feature on the LBS Leaderboard, where INR 1 lakh was being given away plus tickets to signature tournaments on Spartan. Gutshot spoke to Bhee after this victory and asked him a few questions.

Regarding the tournament experience, he said, “The LBS Main Event had one of the best tournament structures yesterday. Starting with a stack of 250 Big Blinds gives ample time for a player to settle down, build the stack and do a happy grind on a Sunday evening. I’m happier about the time I had grinding on Spartan than winning the tournament. My father enjoys watching my game. It’s like a sport for him and he gets really excited while am playing. I’m happy to sit alongside him, play online and have a good time every Sunday.”

About winning the tournament, he said, “It definitely feels special to come first from a tough field. It reinforces the belief in a player who has been grinding for over a year. I have come in the top 3 multiple times in the past couple of months, but the first spot has been haunting me for quite a while now. It certainly feels good, when we’re working towards something and we’re able to pull it off. It’s even better when the journey is so enjoyable, and the time put into it is worth it.’

After winning this mega event yesterday, Bhee also told us about his plans for the prize money, saying, “October has been kind to me each time. I won the Destiny on The Spartan Poker last year, and this year too I won the LBS. I plan to use this prize for the upcoming month which is special as it’s my birthday month.”

He also spoke about the LBS series in general, saying, “LBS is one-of-a-kind series as it gives equal opportunity for not so regular players, because of the low buy in amounts and great pay-out structures. Unlike other major tournaments on Spartan and other websites, anybody can grind this series even with multiple buy ins if required and without really worrying about busting their bankroll.

Spartan obviously has some of the best online tournaments in India, along with the player pool. I have been a regular player for over a year now and I love their promotions, tournaments and even their product is very easy and comfortable to play on.”

Keep reading GutshotMagazine.com for more updates for the biggest and best tournaments Spartan has to offer.