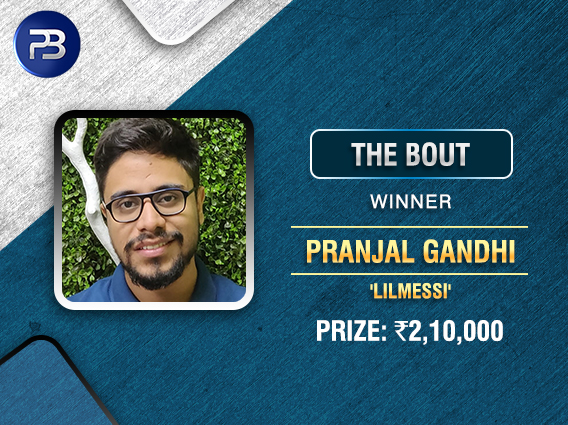 If you are a frequent online poker player in India, Pranjal Gandhi is one player you would’ve heard of by now. Over the past few months, he has taken down a few major titles across several major websites and his consistency has been praiseworthy. Yesterday, he added another trophy to his cabinet.

It was only a little over a week back that Gandhi won the LBS Mini Biggie tournament on Spartan only to hit the news again a few days later. While most of his big wins have come on Spartan, he has been pretty good on other websites as well. Last night, he won a major PokerBaazi title, playing under the name ‘llmessi’.

The Bout INR 10 lakh GTD is a relatively new tournament on PokerBaazi but it has very quickly become a popular one, with many of the top Indian pros participating each Monday night. Yesterday, Gandhi said bye-bye to those Monday blues by beating a 220-entry field to take down this tournament.

It has a buy-in of INR 4,400 and a kick off time of 8pm every Monday. Yesterday, the guarantee was slightly missed and eventually, the top 26 players shared the prize pool with a minimum cash prize of INR 11,000. One of the top players to make a deep run last night was Ashish Ahuja aka ‘rocky3705’, who finished third for a prize of INR 1,08,500.

It was another 6-figure score for Ahuja just a night after he also won the BSS SuperStack on PokerBaazi. As for Gandhi, he beat ‘thehorse7’ in heads-up, who had to settle for the runner-up prize of INR 1,52,000. Gutshot then caught up with Gandhi to congratulate him for his prize of INR 2,10,000 and ask him about the tournament experience last night.

He said, “Thanks. I’m delighted to have won another major tournament on PokerBaazi, after having to beat a tough field. I was second in chips at the Final Table, won crucial flips and was able to convert it into a win.” For similar online poker victories in India, keep reading GutshotMagazine.com.