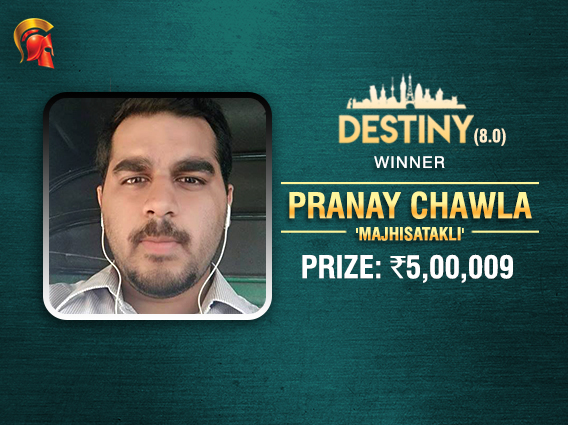 Pranay Chawla is the 6th entrant to Destiny 8.0 Finale


Spartan Poker’s Destiny feature tournament plays itself every Wednesday on the platform. The tournament is one of the oldest among Spartan’s offerings and attracts a sizeable turnout consisting of top players from the country. It also regularly crosses the guarantee, sometimes by overwhelming amounts.

Something like that happened yesterday too, where Destiny INR 20 Lakhs GTD was hosted and crossed the guaranteed amount, bringing the new prize pool to INR 22,20,000. The tournament attracted a total of 444 entries (including 99 re-entries and 144 re-buys). It was a tough Final Table too, which included a few tough pros.

Pranay Chawla aka ‘MajhiSatakli’ overcame the long grind of over 7 hours (7.30 pm to 2.35 am) to ship the tournament and to become the 6th Destiny 8.0 winner. He made a heads-up deal with another acclaimed pro and winner of IOPC Main Event Ashish Munot aka ‘Donkey 07’ and took the lion’s share out of the deal, INR 5,00,009. Munot also took home a massive cash prize of INR 4,54,590 from the deal.

The champion Chawla is a regular online player. Among his recent wins is bagging a title in the recently held Spartan India Online Poker Championship (IOPC). He previously also won the LBS Main Event and its leaderboard on Spartan in March last year. Winning a leaderboard is often a litmus-test for how good a player is, since anyone can win one or two tournaments but topping leaderboards require skill, determination, perseverance and consistent performance.

Chawla also likes playing live and has cashes from previous live events, Indian as well as overseas. He even earned cashes in The Indian Poker Series (TIPS) Season 1 hosted in August last year at Kings Casino, Rozvadov, among many previous live cashes earned.

We got in touch with him after his victory and he said, “To be very honest, last night’s Destiny is a bit of a blur. I really don’t remember too many important moments. I seemed to coast through the Final Table as well and always had the goods when someone jammed.” He further said, “One thing I’d like to say is that this is the tournament that I wanted to win the most because of the potential opportunity to bag the Europe package, thanks to Spartan.”