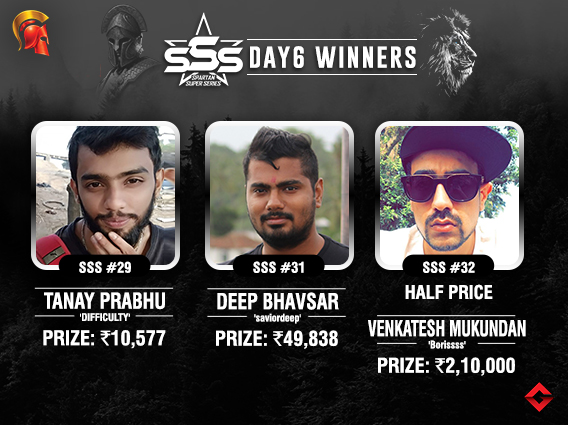 Every day is a fun one on Spartan Poker these days, with the Spartan Super Series (SSS) currently underway and loads of prizes being given out daily. Yesterday was Day 6 of the current SSS edition and a total of five tournaments were hosted including the Half Price tournament which is a newer offering on Spartan. Keep reading for a complete summary of what happened on SSS Day 6…

Spartan usually begins with smaller tournaments and that was the case yesterday too, with the buy-in to this tournament being set at INR 99. A very strong field of 603 entries meant the weekend kicked off with the guarantee breaking and a new prize pool of INR 54,270 being shared among the top 47 finishers. Tanay Prabhu aka ‘DIFFICULTY’ was the last man standing in this event, bagging the top prize of INR 10,577 after he outlasted ‘Lungwangsun’ in heads-up, who took home the runner-up prize of INR 6,719.

With a buy-in of INR 1,100, Kick-off has been a regular tournament in this series and yesterday, 300 entries registered, and the prize pool was distributed among the top 23 players with a min-cash of INR 3,480. ‘Navasbhai’ topped this field and was rewarded with INR 69,750 after he beat ‘Laa’ in heads-up, who won INR 47,250. In the final hand, Navasbhai flopped a pair of Nines and shoved, to see his opponent only having high card, Ace. Navasbhai went on to improve to a 3-7 Straight on the river and won the tournament.

The knockout format is a very popular on Spartan Poker and this particular tournament had a buy-in of INR 770 and the prize pool was shared among the top 27 players, each earning a minimum of INR 2,250. The eventual champion turned out to be Deep Bhavsar aka ‘saviordeep’ as he made a healthy bankroll addition of INR 49,838. In heads-up, he got past ‘pokerdawn’, a player who has won on Spartan in the past. Here, the runner-up was paid INR 33,638 for his efforts. The players got into a PFAI situation in the final hand and saviordeep flopped a 7-J straight on the flop itself to win the tournament.

This was the featured tournament of the day, one which ensured the stiffest competition and had a buy-in of INR 4,400. The specialty of this tournament is that you get re-buys at just INR 2,200, which is 50% of the original buy-in. It was going to take a special effort to emerge on top of this strong field and last night, Venkatesh Mukundan aka ‘Borissss’ was successful in doing so, bagging a handsome bankroll addition of INR 2,10,000. In heads-up, he got past ‘DONKAKING’ who was rewarded with INR 1,47,200. The river completed an Ace-high flush for Mukundan in the final hand, giving him the SSS Half Price title!

The buy-in to the Hi-Fi is set at INR 1,650 and you very rarely find this tournament not crushing the advertised guarantee. Yesterday too, the prize pool reached nearly 5 Lakh, and this was distributed among the top 27 players with a min-cash of INR 4,965. Heads-up began between two Spartan Poker regulars ‘avinkon’ and ‘Tiger10’, with the former ending victorious and taking home the top prize of INR 1,09,975. A QQQTT Full House is what it took to win the final hand of the tournament, with Tiger10 settling for the runner-up prize of INR 74,227.

That’s all we have for today’s coverage of the Spartan Super Series, but you can always come back tomorrow to GutshotMagazine.com for further updates.