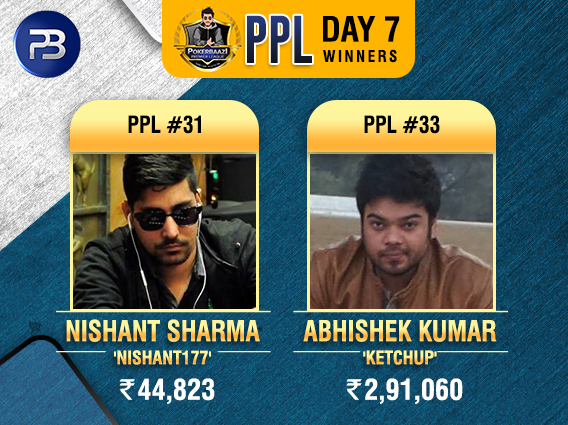 
The PokerBaazi Premier League (PPL) recently launched a special edition series and it’s set to run a total of 8 days, of which seven have already wrapped up. Last night was PPL Day 7 and a total of 4 tournaments were hosted on this Saturday night, with plenty of winners emerging including the popular Nishant Sharma, Vikas Yadav, Barsha Jain and Abhishek Kumar. Keep reading for our complete summary of PPL Day 7…

The day began with a DeepStack Turbo Event and this INR 825 buy-in tournament ended up roping in a total playing field of 318 entries. From these, only the top 36 players received pay-outs and Vikas ‘nohomejerome’ Yadav emerged victorious, smashing through the field to claim his second title of this current PPL series. Here, he bagged INR 52,684 as the top prize while the runner-up ‘MIAO’ was awarded INR 36,967. The winner also finished runner-up in one tournament on PPL Day 4.

As the evening slowly set in, we had another 2L GTD tournament being hosted, this time in the rarely seen 4-Max format. 211 players signed up for the event with an addition 235 re-entries and it was surprising to see a highroller like Nishant Sharma aka ‘Nishant177’ shipping this smaller value tournament. He is probably chasing a leaderboard victory and picked up INR 44,823 for this win after beating Shivaay ‘pokerbaazifan’ Jain in heads-up, who was awarded INR 31,420.

This was a warm up to the mega Main Event which takes place tomorrow and a total of 444 entries signed up in all, each paying the INR 5,500 buy-in. At the end, there can only be one winner and last night, that winner turned out to be Barsha Jain aka ‘sonaa’ who won a pretty handsome prize of INR 4,46,220 for shipping the tournament; the player beat ‘escape’ in heads-up who won INR 3,12,798 for finishing second.

The final tournament of the day saw the guarantee being passed easily due to the 396 entries recorded. The winner Abhishek Kumar has won quite a few online poker titles in the past and added another one to his tally here, taking down the top prize of INR 2,91,060. Playing under the name ‘ketchup’, he beat Sandeep Varma aka ‘effuno’ in heads-up, with the latter bagging INR 2,03,7420 as a runner-up prize.

One last day is scheduled for this edition of the PokerBaazi Premier League (PPL), including the mega Moneymaker tournament. For all timely updates on the same, keep following GutshotMagazine.com.