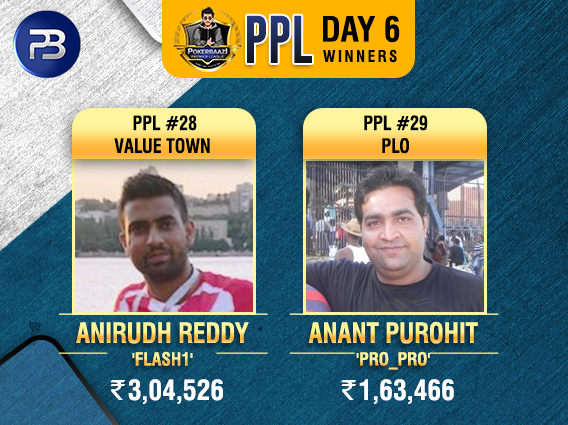 
The third last day, Day 6 of the PokerBaazi Premier League Special Edition (PPL SE) was conducted yesterday with a total of 4 events, among which the biggest was Value Town INR 15 Lakhs GTD. There was also the PLO DST which saw community regular Anant Purohit ship the title. Here’s a round-up of what went on yesterday:

The day kicked off with INR 2 Lakhs GTD tournament with total 385 entries (including 204 re-entries) signing up to the virtual felts on PokerBaazi. The top 45 places were paid in the tournament out of which ‘ketchup’ bagged the biggest amount of INR 42,000, beating PPL SE #21 winner ‘dybalamask’ in heads-up. The runner-up settled for INR 29,400 as the second-place cash prize.

The second of the four scheduled events saw an INR 10 Lakh GTD being hosted for INR 3,300. The field came to 364 entries (including 172 re-entries). The top 45 places received a pay-check and it was ‘jeeven’ who aced the tourney and earned INR 2,29,320 as the first-place cash prize. He beat ‘KarmaPoker’ in heads-up to secure the title, and the runner-up took home INR 1,60,524.

The biggest PPL SE tournament of the day was Value Town, hosted with a buy-in of INR 1,500, a great return tournament and hence the name. The tournament attracted a colossal field of 1,207 entries (including 431 re-entries) and brought the prize pool to over INR 18 Lakhs.

Anirudh Reddy aka ‘flash1’ overcame the staggering field and shipped the tournament for INR 3,04,526. Reddy beat Gokul Raj aka ‘Nygma’, a reputed community regular, in heads-up to win Value Town. Raj eventually settled for INR 2,13,457 as the runner-up prize money.

The last event to wrap up the day was played in the PLO format for a buy-in of INR 2,750. A total of 296 entries (including 153 re-entries) were attracted to the felts, making the prize pool of over INR 7 Lakhs. The top 36 places were paid out of this prize pool.

Anant Purohit aka ‘Pro_Pro‘, well-known live/online community entity, shipped the tournament for INR 1,63,466, beating ‘durrrr1310’ in heads-up, who earned INR 1,14,700 in runner-up cash prize. Purohit has many titles to his name in his career. He was recently in Sochi where he played the EPT Main Event. On live felts, his recent significant achievement was winning 2 titles in Spartan Super Series (SSS) this month.

Day 7 will kick off today at 5.30 pm on PokerBaazi with the Warm UP INR 20 Lakhs GTD being the highlight of the day, starting at 8 pm. The Leaderboard too saw a change. Gaurav Sood aka ‘gaug17’ who was leading up till now was chased down and crossed by Ankit Jajodia aka ‘akj290’ with 4,677 points.

Keep reading GutshotMagazine.com for more such tournament round-ups and results and for general poker news from around the world.