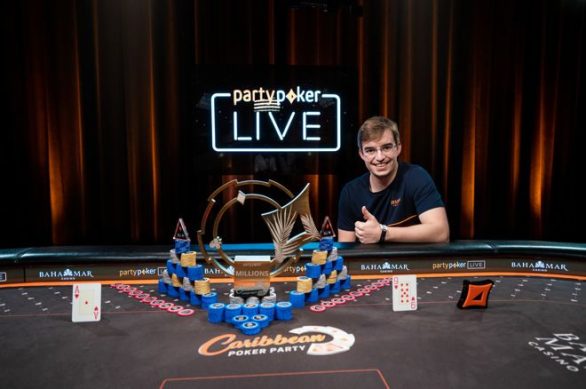 The Main Event of this series was the $5,300 NLHE which had its first day on Nov. 10, with the champion being declared on the last day. The Main Event attracted a staggering 1,815 entries. Portuguese-native Filipe Oliveira shipped this event and took home a total of $1,500,000 (~INR 10.79 Crores), this being the biggest cash prize of his career, and that too by a gigantic margin. His previous best win was of $34,616 at the EUR 2,150 NLHE Turbo Bounty-8 Handed held in 2016 at the European Poker Tour (EPT) in Ireland.

The official final table of the Main Event saw eight players, after Neik Van Der Sluijs, Anton Wigg and Alex Lynskey got eliminated the same day. The American-pro Joe Kuether managed to sneak-in to the final table after Lynskey’s exit despite losing tens to Craig Mason’s jacks for a ton of chips.

The final table action was a roller-coaster ride for the Portuguese champion, losing a series of pots to drop to 35 million at 5,000,000/10,000,000/10,000,000. He went all in pre-flop with  K6o and got called by two players, with one having KJ hole cards. The flop witnessed a six, and Oliveira came back with a pair. The turn and the river of KQs also found a King pair with Oliveira, beating Maslak’s A10s.

Oliveira said, “I was really lucky,” about his comeback. “That’s about it. I was pretty lucky all the way.” Another Portuguese was at the final table, the 2018 bracelet winner Diogo Veiga, but was eliminated by Mason when he won a flip with Veiga and then opened jacks at the same 10 million level.

The pot that gave Oliveira a decisive lead was where he made nothing but a pair of deuces. He put in a three-bet preflop and with 42s, and flopped a bottom pair on an ace-high board. Mason put in a small bet with King-high and then turned a king. Oliveira bombed the turn for pot. Mason tanked all the way till he used a time extension before he ceded to Oliveira.

“It was really hard playing with him. It was pretty tough for me to have him on my left. I was happy when he busted because it was more chances for me to win,” Oliviera reacted. “It’s very nice. I worked all these years for moments like that.”