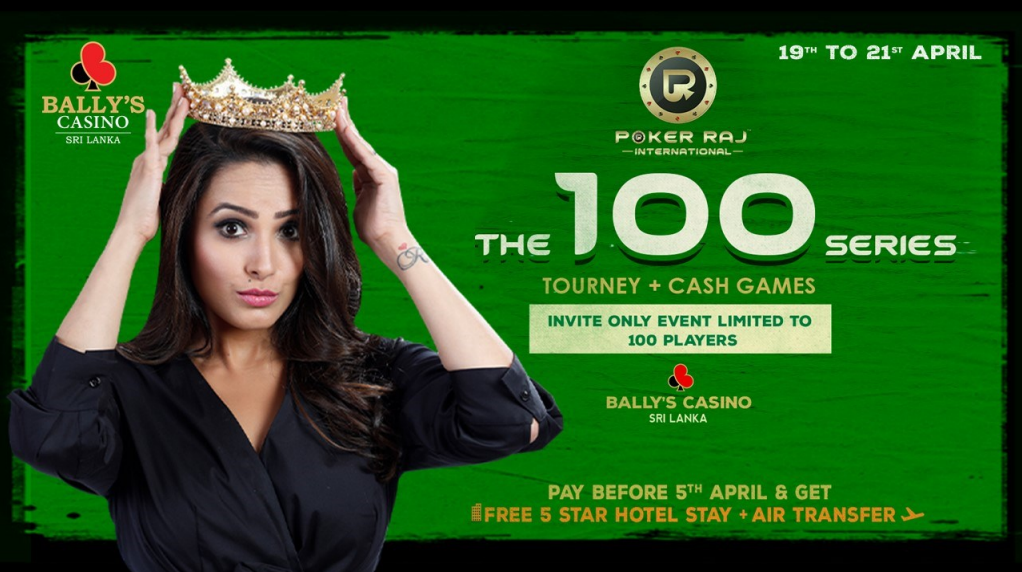 
A couple of weeks back, new online poker company PokerRaj announced that they will be getting into the live poker space as well, with their latest brand called PokerRaj International Series (PRIS). They didn’t want to begin small but instead with a bang, announcing a massive $500k GTD tournament in Bally’s Casino, Colombo.

Titled ‘The 100 Series’, the tournament was initially expected to happen in March but was put off due to other live series taking place like the WPT Vietnam, scheduled between 14-24 March 2019. Now however, the new dates are announced, and we are happy to announce that the series will indeed take place, between 19-21 April 2019.

It is named 100 Series as it is an invitational event with a maximum limit of 100 players. The specifics will stay the same whereby each entry will cost players $5,500 (~INR 3.8 Lakh) and 10% of the field will get paid out. However, don’t worry if you bust out early as cash tables will also be running at the venue.

One slight change made is that the guarantee of the series is now $250,000-$500,000, meaning the guarantee will vary depending on the number of participants that will be making their way to Bally’s Casino in Colombo. If we get 50 or below entries, the top 5 places will be paid out from a prize pool of $250k.

So, are you willing to be a part of the series and winning prizes that haven’t been seen before in Indian tournaments? We’re looking at a top prize of $140k (~INR 98 Lakh) if the prize pool is the $500k one. Some of the top poker celebrities that will be in action at the venue include Raj Kundra himself, PokerRaj ambassador Anita Hassanandani Reddy, Harman Baweja, Melika Razavi, Vanessa Alvarez and others.

If you pay before 5th April 2019, PokerRaj is also giving you free hotel stay and to and fro airfare. For all updates on the series, keep reading GutshotMagazine.com.