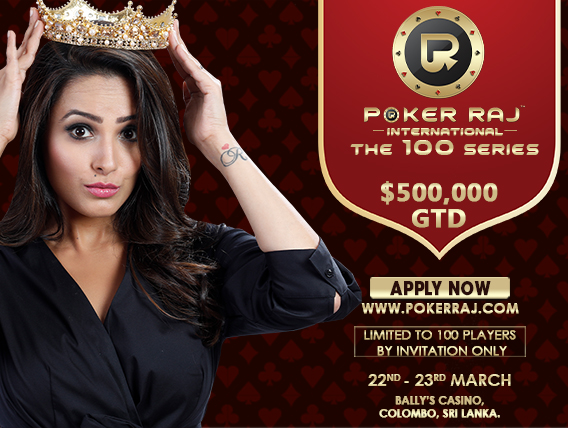 
Just like PokerStars has a PokerStars LIVE brand, partypoker has partypoker LIVE and Adda52 has Adda52 Live, another reputed poker website has gone ahead to indulge in organizing live poker tournaments. Not too long ago, PokerRaj made the announcement of going international, with their first ever live series set to be hosted in Bally’s Casino in Colombo, Sri Lanka.

The Shilpa Shetty and Raj Kundra promoted Viaan industries launched PokerRaj last year and they have been regularly hosting online tournaments and cash tables for players ever since. Now however, they are set to take a big leap in the business, launching PokerRaj International Series (PRIS).

Coined ‘The 100 Series’, the tournament is an invite-only one where 100 players will fly down to Colombo to battle it out, with 10 of the best finishing in the money. As per a release from PokerRaj, the event is expected to see quite a few poker enthusiasts and celebrities from around the world in action, so we’re set to witness quite a grand event in Sri Lanka.

Talking about the development, Chairman Raj Kundra said, “We have created this IP as an exclusive 100-player only tournament and will travel with it around the world, hosting 4-5 events a year. It’s a unique offering and an event that promises to bring glamour, poker and some of the best players together.”

Such a high buy-in is something that isn’t heard of too often, especially in India, so it’ll be interesting to see how the tournament pans out next month. If interested in participating, you can apply through the PokerRaj website. Until then, keep reading GutshotMagazine.com.