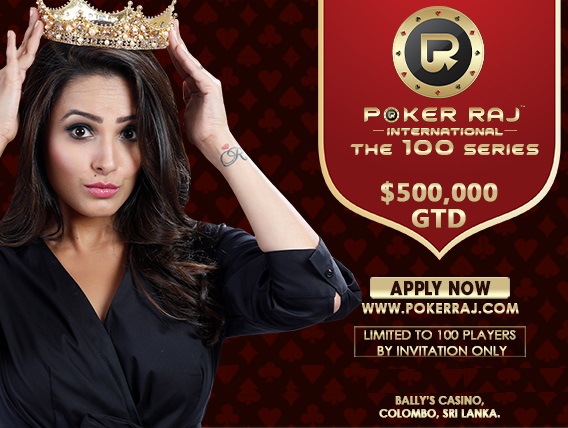 
PokerRaj created headlines recently when it announced that it will conduct a PokerRaj International Series (PRIS) with a guarantee of $500,000 (~INR 3.52 Crores). The brand has been active and kicking since quite a while now and recently they even signed up with popular TV actress and poker enthusiast Anita Hassanandani to become its brand ambassador.

In a recent development, the dates for this ‘The 100 Series‘ that had been announced for PRIS, 22-23 March 2019, have been deferred. The series still has the same details attached to it like the venue of Bally’s Casino, Colombo, Sri Lanka, and the fact that it’s limited to 100 players per invitation only, but only the series has been put to a later date.

The move could possibly be a result of some community concerns over clashing dates with another big Asian poker series, World Poker Tour (WPT) Vietnam, which scheduled to take place between 14-24 March 2019. The new dates for PRIS haven’t yet been announced but is expected to be revealed in a few days.

Vietnam is a hot-spot for poker and especially so for the Indians who are looking to go there because the country’s standard of living suits an average Indian poker player’s pocket. Last year’s WPT Vietnam also saw a great number of Indians participating and Dhaval Mudgal won the Main Event of the series. This year too Vietnam saw an Indian winning a huge event, the 2019 APT Kickoff Vietnam Main Event, by Abhinav Iyer.

Due to the above factors, the PRIS dates were possibly deferred, to let the live grinders try their hand at the upcoming WPT Vietnam and make some deep runs and wins there. By delaying the series, PokerRaj has paid heed to the community’s demands.

Raj Kundra and Shilpa Shetty owned Viaan Industries operates and owns PokerRaj. About PRIS, Kundra commented earlier saying, “It’s a unique offering and an event that promises to bring glamour, poker and some of the best players together.”

An event like this with such a great buy-in and GTD in the Indian poker scenario is a rare occasion and will be interesting to watch as it unfolds itself. Keep reading GutshotMagazine.com for more such updates and for general poker news from around the world.