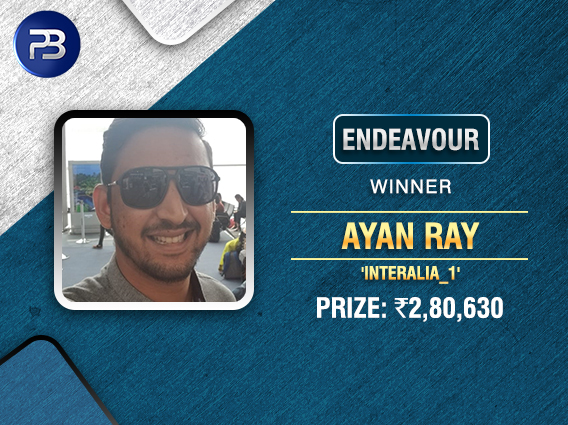 You are never short of opportunities as an online poker player in India. Daily, you can find plenty of high-value tournaments to be a part of, across the various online poker platforms. Yesterday was Tuesday and on PokerBaazi, the very popular INR 10 lakh GTD The Endeavour was hosted.

With a huge influx of new players joining PokerBaazi in recent times, it’s very rare that you get to see the guarantees of their featured tournaments not being broken. More often than not, they see an overwhelming participation and that was the case again last night, with 422 entries paying the INR 3,850 entry fee to register.

Once registered, everyone would’ve had their eyes on the money finishes but only 44 places from this field were eventually paid, with a minimum cash of INR 7,385. The first to win a cash prize was Rubin Labroo aka ‘kornkid’ (44th) while Apratim Sharma aka ‘checmate (42nd) also took home a min-cash.

As the tournament progressed into the night, plenty of other PokerBaazi regulars hit the rail, including Rajat Mahajan (39th), Sagar Choudhury (33rd), Pranav Khandalkar and Pranav Bang (29th and 30th), Sriharsha Doddapaneni (27th), and Harsh Dembla aka ‘dembla’ who finished 8th.

The competition got even tougher on the Final Table and one of the tough nuts to crack on the FT was Sahil Mahboobani aka ‘ImHighIshove’ who ended a good run in 5th place for INR 81k, just over a week after he finished second to Nikunj Jhunjhunwala in the WPT India Main Event.

A few more eliminations and then, the heads-up session began between Shardul Parthasarathi aka ‘duuurrrr’ and Ayan Ray aka ‘interalia_1’. The former has been on a good run on PokerBaazi, recently having won The Vegas on their platform around 3 weeks ago, but this time, it wasn’t going to be about him.

Ray emerged victorious against his heads-up opponent, winning the top prize of the night for first place – INR 2,80,630. As for Parthasarathi, he made another worthy bankroll addition of INR 2,06,780 for finishing second. The winner would’ve been extremely happy about this victory, just a day after he reported some technical difficulties on the PokerBaazi client.

Gutshot caught up with the winner to congratulate him and ask him his views on last night’s tournament. He said, “Thank you. I love the structure of The Endeavour and it’s a great tournament overall. The win last night made the experience even better, with some good players like Sahil Mahboobani on the Final Table.”