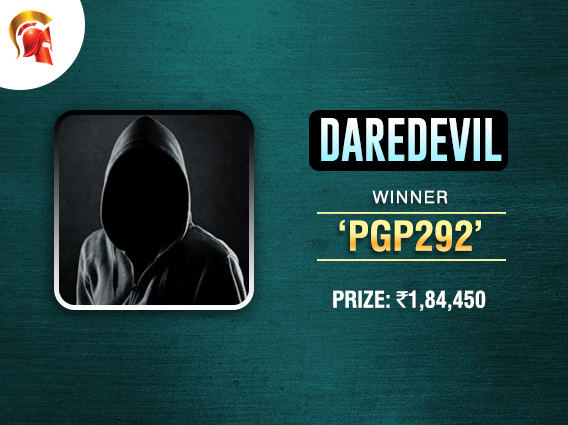 ‘Pgp292’ wins another title, this time at Spartan DareDevil

When you’re on a roll, you are on a roll. And ‘Pgp292’ seems to be a follower of this mantra. In last night’s DareDevil tournament he outlasted the field to take down this featured tournament title at The Spartan Poker. This win comes just a day after he shipped the Triple Bubble tournament at Spartan.

As our readers may be aware, the DareDevil follows an interesting format for a re-buy tournament. While the original buy-in of this tourney is INR 4,400, any player who wishes to rebuy after getting busted out, is allowed to do so at a 50% discount i.e. INR 2,200. So plenty of value for participating players and it doesn’t hurt that the DareDevil has a 6 Lakhs guarantee in place. Last night’s prizepool went past that mark to settle at INR 6,20,000 when 72 players came together to battle it out at the virtual felts of The Spartan Poker. 8 players would end up cashing out with INR 27,900 being the min payout all eight received. Couple of familiar names such as ‘Exit the Matrix’ running deep in this one. This player has won a few big titles in recent months including one side event each in the August and September editions of the Spartan Super Series (SSS). He also scored a win at Spartan’s Little Big Series Main Event back in July. Here though, he was unable to go the distance finishing in 4th place for a payday of INR 69,750.

Heads-up battle took place between Pgp292 and another reg in Sagar Choudhury a.k.a ‘Strangeplay’. Choudhury would have really fancied his chances at the title seeing as he won this very same tournament just a couple of weeks ago. Pgp292 consolidated his stack by knocking out ‘godspeed’ in 3rd place (INR 91,450) and getting a 2:1 lead over Strangeplay. It took less than 15 hands before we came to the last one with Pgp292 continuously winning small pots to maintain his lead. The final saw a 3-bet all-in from Strangeplay with Kd Ad. Pgp292 had good holdings for headsup and more importantly a big enough lead so he called with Kh Jh. It was all going swimmingly for Strangeplay on the flop Tc 8d 2h and especially on the turn Ks. But the river gods had destined this title for Pgp292 as the Jd opened up on fifth street sealing the victory in his favour and first place prize of INR 1,84,450. Strangeplay would have to console himself on what could have been with the runner-up prize of INR 1,16,250.