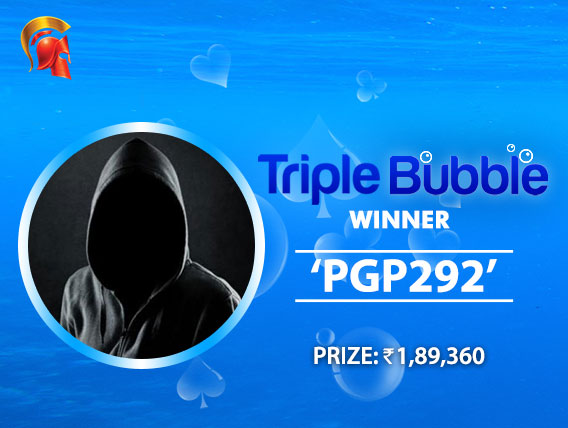 The top poker companies in the country keep providing top value tournaments and promotions for poker enthusiasts from across the country. Whether it is in the form of big guarantees or innovative offerings, it really is a great time to be a poker player in India. One of these innovative tourneys which happens at The Spartan Poker every Friday evening is called the Triple Bubble. At last night’s Triple Bubble, it was ‘Pgp292’ who emerged as the victor defeating the rest of the field.

What’s so unique about the Triple Bubble you ask?! Well as the name suggests there’s not one but 3 ‘bubbles’ in play for the participants in this tournament. The money bubble traditionally is the player who busts just short of the payout positions. This first bubble gets his or her original buy-in back in Spartan’s innovative take. The second bubble is the player who falls short of the final table and this player gets a ticket into Spartan’s signature Millionaire tournament where a massive 1 Crore guaranteed prizepool is on offer! The ultimate bubble has to be the one where the player falls just short of the title and here this player will receive a ticket into the Millionaire as well as into the Two of a Kind (2.o.K), another Spartan monthly special where the top 2 finishers get awarded 15 Lakhs each! With such extra value on offer for the three bubble players, one could almost think that players would want to bust out in those positions.

Pgp292 made it to headsup and he was up against one of the well known regs of the circuit in Anant ‘Pro’ Purohit. Pro was responsible for the elimination of ‘pokerram’ in 3rd place but even with that knockout he was still a 2:1 underdog going into headsup basis stack size. That changed in a matter of 5 hands when Pro with 5c 6s defeated Pgp292’s Jd 7h on a board of 2h 6c Ks Ad 9d with a pair of Sixes. That brought Pro’s stack (1.2 million) to almost even with his opponent (1.3 million). And just when you thought this would be the time to grab some popcorn and settle in for a long HU battle, it was all over. Preflop Pgp292 (As 6s) raises 23k (7,600/15,200 ante 1,520) and gets repopped by Pro (9c Ts) to 74k. Feeling assured that his Ace was superior, Pgp292 made it 178k which was flatcalled by Pro. 5c 9d 8c gave the latter top pair which he decided to check. Pgp292 bet 135k and he gets reraised by Pro to 413k which Pgp292 calls. 4s on the turn and Pro moves the rest of his chips into the middle. Pgp292 makes the call with his gutshot draw and Ace and gets lucky on the river Ah. Pro falls short of the title but will have to console himself with a payday of INR 1,28,607 not to mention those free tickets into the Millionaire and 2.o.K. For the win, Pgp292 get first place prize of INR 1,89,360.