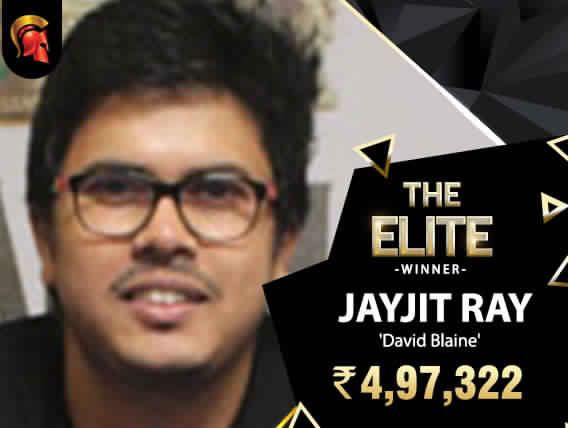 
Of course, poker must be a game of skill. If it was all luck, gambling and chance, how do we have the same players winning so consistently? However, that’s an argument for another day. For now, we’re here to report a win of one of those consistent poker players in the Indian poker circuit, Mr.Jayjit Ray!

Last night, he signed up to The Elite INR 20 Lakh GTD, played in the very popular 6-Max format. As the name suggests, it’s only for the most elite poker players in India and the buy-in of INR 11,000 tells you that. This tournament is played every Friday night on Spartan Poker, beginning at 9pm.

Last night’s grind turned out to be an extremely long one, winding up at 4:52am this morning after a grind of nearly 8 hours. However, for those who stuck around till the end, the sleepless night would’ve been a fruitful one, as they all took away handsome pay-checks, some getting fatter ones than others.

The field of 228 entries broke the guarantee to create a slightly inflated prize pool of INR 22.8 Lakh, and this was distributed among the top 17 players, each receiving a minimum cash prize of INR 35,796. Some of the top names to emerge in the money included Laksh Pal Singh aka ‘LuckyBhai$’ (16th), Pranav Khandalkar aka ‘pranavpoker’ (9th), Nadeem Basha aka ‘pokerbill’ (8th), Apratim Sharma aka ‘checm@te’ (7th) and others.

As the bigger prizes started rolling out, the competition started getting stiffer and Vinod Megalmani aka ‘Champ1234’ was the next top player to hit the rail, finishing 5th for INR 1.68 Lakh. Sriharsha Doddapaneni aka ‘GTOsucks’ exited in 4th and received INR 2.08 Lakh while ‘JasonBourne’ was the next to bow out, finishing 3rd for INR 2.52 Lakh.

With serious pay jumps ahead, the final two players decided not to take a risk and to call out a heads-up deal. Jayjit Ray was pitted against ‘Exhaust’ in this stage, with the latter also having won quite a few major tournaments on Spartan Poker. Eventually, they put an end to the tournament in Level #36, with the blinds having reached 14,000/28,000-3,500.

Here, Ray was ahead in the chip counts and received the bigger pay-out of INR 4,97,322, playing under the username ‘David Blaine’ on Spartan. You couldn’t have missed this name as he has won quite a few tournaments on this platform, including Summit on PokerBaazi last in October 2018, Destiny in December 2018 and of course, The Elite itself in March this year. You can check all his recent poker achievements here. Exhaust won INR 4,63,925 as his share of the deal.

Gutshot spoke to Ray about having won Elite not for the first time, but second time in the space of a month. He said, “It feels really nice to have won The Elite again. I was swinging continuously with my stack on the FT and then got into some good spots and also got lucky in one hand. Ultimately, I reached the finish line.”

For all timely updates from the Indian online and live poker industry, keep following GutshotMagazine.com.