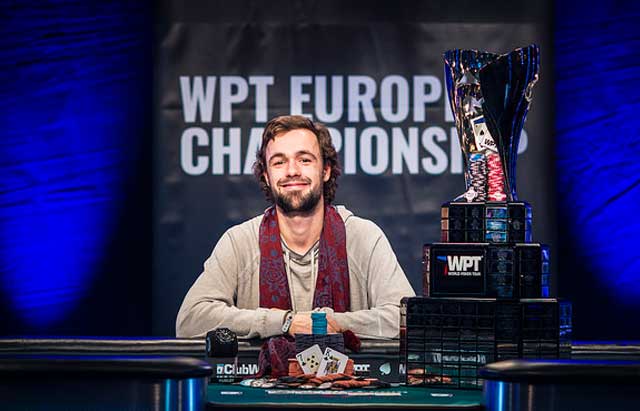 Just a few days back, we reported the news of Indian poker pro Kunal Patni going into Day 3 of the WPT European Championship Main Event with the chiplead. There were 49 players left and Patni had the most chips among them, but he was ousted on Day 3, finishing at the 39th spot and winning €6,125 (~INR 4.78 lakhs).

The Main Event went on and it was German superstar Ole Schemion who finished as the chipleader going into Day 4, with just 16 players surviving. The 25-year old German kept up the good work on the final day and eventually won the event, securing a prize of €218,435 ($260,858) and his first ever WPT title. The event was a €3,300 buy-in one that had a total field of 339 entries.

Schemion started heads up play with a 2-1 chip lead over Michal Mrakes and it wasn’t long before he started dominating his opponent. It took a total of only 20 hands in heads up to decide a winner, when Schemion called Mrakes’ flop shove with top pair. Mrakes had a flush draw but didn’t get there, giving Schemion the win with K-pair.

It was a very fitting result for the local boy as this event was the first ever WPT Main Tour event held in Germany and also the first WPT Main Tour event televised in Europe in 5 years. Schemion has started his year well and will be looking for bigger wins this year, to close the gap between him (3rd) and Christoph Vogelsang & Fedor Holz on Germany’s all-time money list. He currently has $13,801,445 in live poker earnings.

For all big wins and similar news from the world of poker, keep reading GutshotMagazine.com!