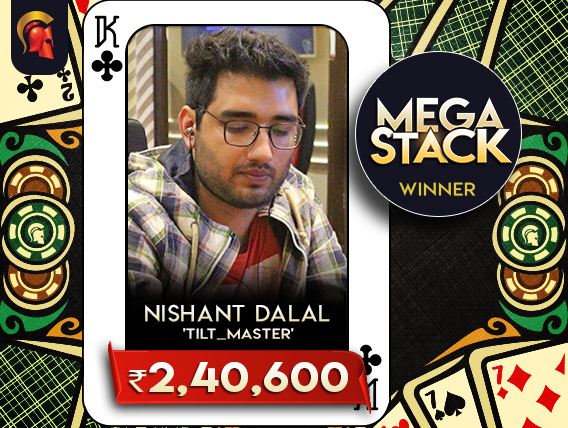 
Spartan Poker is one of the companies spearheading the industry for a long time. In terms of popularity in the community, they have been in this position only because they come up with the best feature tournaments every day of the week, the bread and butter of poker players in India.

Last night’s feature tournament on Spartan was the Mega Stack INR 12 Lakhs GTD which attracted a turnout of 399 entries (including 71 re-entries and 123 re-buys) to the felt. The relatively medium-sized buy-in of INR 3,300 was chipped in by the field and created a sizeable prize pool. The top 39 positions were paid in the tournament for a min-cash of INR 8,280.

Overcoming the field and a mildly tough Final Table, a couple regs spotted on it, was Nishant Dalal aka ‘tilt_master’. The winner took home INR 2,40,600 as the first-place cash prize, beating ‘0HUMAN0’ in heads-up.

The final hand action happened swiftly since the opponent had very little chips and Dalal had a chip lead of over 9:1. Dalal, with Ad 3s, shoved pre-flop all in and got a call by 0HUMAN0 who was packing Ks Tc. The board revealed Jh 9c 4c 5h 2d and Dalal showed an Ace-to-Five straight which had his opponent’s Kinghigh beat. Dalal collected the total pot of 1,535,576 chips and his opponent had to settle for INR 1,59,960 as second-place cash prize.

Dalal is a regular online grinder on various leading poker platforms in India. He has made deep runs and has won some tournaments in the past. One of the big wins recently was acing Spartan Sunday SuperStack for INR 6,87,700 last December, beating well-known Sriharsha Doddapaneni in heads-up. Dalal has showcased what skills he is packing in the past, beating a tough opponent like Doddapaneni. He’ll be looking to make some more wins and deep runs using this welcome amount he acquired yesterday.

We contacted Dalal after this win and he was happy about his win saying, “It was a swift victory for me. I lost a chip leading pot close to the Final Table and got down to just 10 big blinds. In the 3-way battle, someone tried to bluff me, and I called, which changed the game completely. After that, I was sure I’ll win this one since I had a big chip lead.”

Keep reading GutshotMagazine.com for more such tournament results and roundups and for general poker news from around the world.