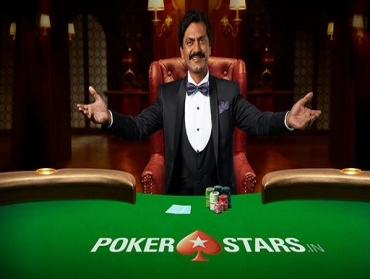 
PokerStars India, the Indian arm of the worldwide giant, began operating in the country in April 2018, and since then the company has gone on to make headlines. They first partnered with GPL India, then launched the popular Diwali Rush series, then Winter Series, and are currently busy in giving away 2019 EPT Sochi packages on the platform. 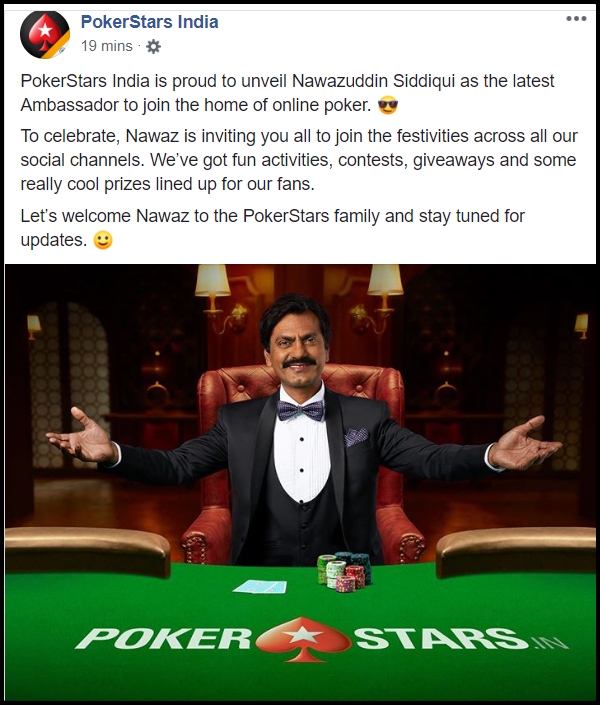 To celebrate this new addition to PokerStars, the company launched some promotions on their site PokerStars.in. Three videos have been uploaded to the site where Siddiqui is starring (below is one of them). The promotion asks to guess if Siddiqui is bluffing or not in those videos, and after posting correct answers, you’ll get five free tickets to five freerolls scheduled between 3-31 March. These freerolls have INR 27.5 Lakhs in total guarantee. Additionally, INR 1,500 cashback is offered to players when they make their first deposit of INR 500 or above using code ‘NAWAZ1500’.

Coming to the newest member of the PokerStars Team, Siddiqui is an alumnus of the coveted National School of Drama and has worked in the Bollywood industry for a long time. Initially working as small-time characters, he came to the limelight when he landed the breakthrough role of Faizal in Anurag Kashyap’s Gangs of Wasseypur. He grinded his way to the top and now sits alongside (arguably higher than) the Khans and Kapoors of the industry and no one with a single brain-cell functioning could possibly deny that.

Siddiqui commented on this development saying, “It’s a great pleasure to be associated with PokerStars India. I have been intrigued by poker for some time now as I believe it hits the magic balance between being easy to learn yet gives ongoing opportunities to increase your knowledge and master the game. PokerStars is one of the most popular and trusted poker brands in the world thanks to its wide range of tournaments and games, excellent 24/7 customer support, top level security and award-winning software. I am looking forward to improving my poker skills alongside some of the best professional poker players at PokerStars India.”

Ankur Dewani, CEO of Sachiko Gaming which operates PokerStars India, also weighed in on this saying, “We are delighted to partner with Nawaz for this ground-breaking TV advert. Nawaz is one of the most engaging and, popular and personalities in Bollywood who has shown great resilience, determination and skill to get to where he is today. These are all key attributes belonging to poker players and PokerStars India so we could not have partnered with anyone better. I look forward to working with him on many successful projects in the future.”

By adding the well-known Bollywood actor to its list of amabassadors, PokerStars India hopes to strengthen its presence in the country in an industry where local companies are leading the game for now. The company already has the backing of its worldwide giant counterpart and it’ll be easy for them to create ripples in the community.

Keep reading GutshotMagazine.com for more such community updates as well as for general poker news from around the world.