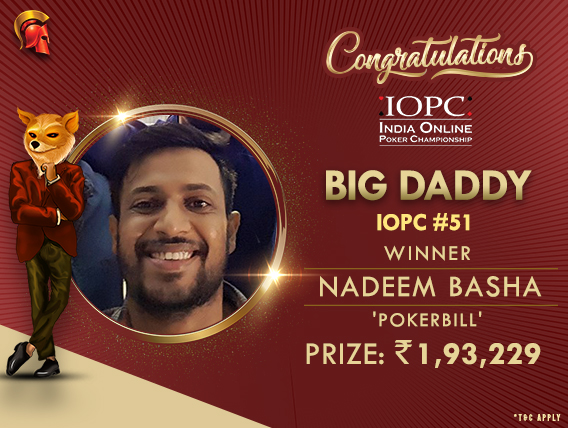 
The prestigious India Online Poker Championship (IOPC) is now in the books. Yesterday saw the final day of the series, which hosted a total of 7 events. Ashish Munot conquered the Main Event INR 1.5 Crores GTD showcasing some phenomenal poker skills along the way.

One of the feature tournaments of Sunday on The Spartan Poker – Big Daddy INR 10 Lakhs GTD – was hosted and saw a colossal 1,081-entry field (including 121 entries) attracted to it. The buy-in of INR 1,100 was chipped in by the field and it crossed the guaranteed amount by an extra INR 81k.

The player to emerge as the champion in Big Daddy was Nadeem Basha aka ‘pokerbill’, who took home INR 1,93,229 as the 1st place cash prize after beating ‘KasolHieghts’ in heads-up, who had to settle for INR 1,39,179 as the runner-up prize. The tournament saw top 81 places being paid for a min-cash of INR 4,505.

In the final hand, Basha had already accumulated a lot of chips and was sitting with a comfortable over 3:1 chip lead. Basha went all-in pre-flop with King-Seven suited and his opponent called with pocket Fours. The board ran Ks 7h 5c 6c As, pairing Basha’s both hole cards and returning nothing for KasolHieghts. Basha swept the table clean and bagged the title with this hand.

The interesting part of heads-up was that both players were PokerGuru Staking members (formerly known as AceJack Stable) so the competition must’ve been even tougher as the stable has top coaches and players to train and guide young players like Basha.

The champion of this tournament, Basha, has already bagged several titles on most of the reputed platforms in India. He won two feature tournaments on Spartan recently, one in December last year – The Flash – and prior to that in October – Sunday SuperStack. WIth yesterday’s win he has even earned an INR 30k Goa package to play in the Big Daddy casino, an amazing opportunity for him to experience playing live and strengthen his poker skills even further. With this welcome bankroll addition in Big Daddy yesterday, he’ll be hoping to win a few big titles in coming time.

As is regular with Big Daddy, the tournament drew some of the best of the bests in the community. Among the paid players, the knowns who ranked high were Akshay Nasa (6th), Guneet Kwatra (8th), IOPC #36 SHR runner-up Pulkit Goyal (9th), and Pranav Bang (10th). Keep reading GutshotMagazine.com for future tournament results and updates from around the world as well as for your daily dose of poker news.