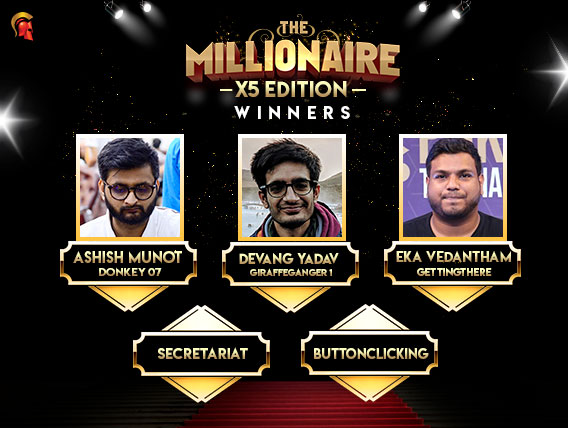 
It has been an exciting weekend of poker action at the virtual felts of SpartanPoker.com where another of their innovative tournaments came to a close in the early hours of Monday. The Millionaire X5 tournament promised to make Millionaires out of the top finishers in this tournament and eventually as the name suggests not one but 5 winners walked winning a cool million each in prizes.

These winners were Ashish Munot aka ‘Donkey 07’, ‘buttonclicking’, ‘Secretariat’, Devang Yadav aka ‘giraffeganger_1’ and Eka Vedantham aka ‘gettingthere’ who outlasted 224 entries on the final day of this tournament to take the lion’s share of the prizepool.

Day 2 of the Millionaire X5 saw 224 entries and more than 1.1 Crores in the prizepool being in play at Spartan Poker. And while there was plenty of juice to play for up top, 219 of those 224 would fall short of becoming Millionaires. So laser like focus across the tables by the participating players in order to make it to the top 5 and only 120 survivors would eventually make the money with min-cash being 14,830.

A tournament like this drew players from across the country including some well known names. One of those was Siddarth Singhvi aka PeterPunter who has numerous deep runs and titles at Spartan. This time around however the 35-year old player from Pune fell agonizingly short, finishing as the bubble boy in this tournament.

Other known quantities who made the money but were unable to make the final table included Jayjit Ray (99th), Aditya Sushant (90th), Sajal Gupta (65th), Rajat Sharma (53rd) and Vivek Rughani (12th) among others. The final table bubble was yet another known face in Ashish ‘Spewushhhiiiii’ Ahuja who fell in 10th place.

A few more eliminations are we were down to the Millionaire bubble. With 6 players left, here’s how they stacked up:

Except for chipleaders ‘buttonclicking’ and ‘Donkey 07’, everyone else was relatively even in chips so it could be anyone who could fall short. But sometimes everything goes as per script and sure enough it was the short stack Veer who got it in against the chipleader Donkey 07.

The latter had won about 6 hands in a row and built his stack to over 8 million while things went in the opposite direction for Veer who had just over half a million in chips in the last hand of the tournament with blinds 32,000-64,000-4,500. Finally getting a semi-decent hand in Kd 7d, Veer moves his stack in as the rest of the table folds. Unfortunately for him, the chipleader wakes up with pocket Nines (9c 9h) and has no hesitation in calling.

A dry board of 6♠ J♠ 6♥ 5♥ 4♦ for the short stack as he exits the tournament in 6th place and that brings an end of the proceedings as well as a lot of joy for the remaining 5 players who all get more than a million for their efforts in this Millionaire X5 tournament.

Congratulations to all the winners and ITM finishers from Gutshot. No doubt all eyes will now turn toward the other two special features of this month on Spartan i.e. Spartan Value Series (SVS) starting on Wednesday and in the latter half of the month we have the Spartan Super Series as well.

News and action from all this and more right here at GutshotMagazine.com so stay tuned!