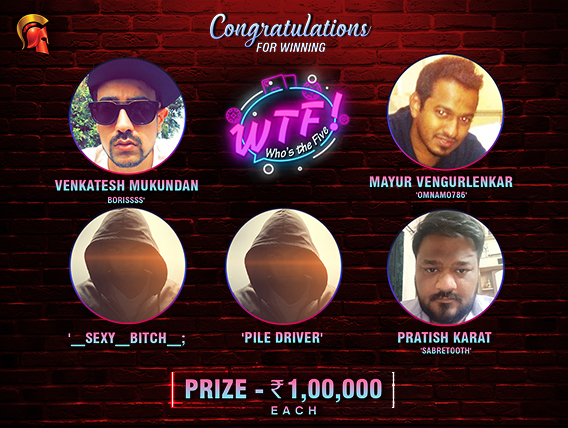 So recently, Spartan Poker decided to launch a new featured tournament called WTF. No, it’s not what you’re thinking, and neither is it ‘Wednesday Thursday Friday’. The tournament literally means ‘Who’s The Five’ as it has not one or two, but five winners each time it is hosted on Friday night!

It follows the same format as the Spartan signature tournament 5 For 5 where play is halted when someone is eliminated in 6th place. Regardless of chip counts, everyone in the top 5 is rewarded equally and that’s what happened Friday night too in WTF INR 1 Lakh GTD for top 5 players.

It kicked off at 8pm and ran for a little short of 6 hours, ending at 1:44am this morning after ‘KingPokerJT’ was eliminated in 6th place for a prize of INR 54,180. While this player made a good run and was rewarded well, he would’ve been disappointed as he missed the massive pay jump as all of the remaining 5 players were rewarded INR 1,00,000 each!

The field in Friday night’s tournament was of 311 entries, each paying INR 2,200 and this was a mid-stakes tournament while the higher stakes tournament Elite also took place simultaneously, one for those who have much bigger poker bankrolls. Coming back to WTF, the top 20 players received pay-outs in this event, each receiving a minimum of INR 6,020 which was nearly triple the original investment.

The winners were (in order of chips) Venkatesh Mukundan aka ‘Borissss’, Mayur Vengurlenkar aka ‘OMNAMO786’, ‘__Sexy__Bitch__’, Pratish Karat aka ‘sabretooth’ and ‘Pile Driver’. However, they weren’t paid on the basis of these chip stacks, all receiving a prize of INR 1 Lakh each. There were some regulars in the mix and those to cash included Gaurav Sood aka ‘mozzie17’ (16th), Puneet Dhawan aka ‘Gro$peLLier’ (8th), Arjanveer Chadha aka ‘bazzingaa’ (7th) and a few others.

For more updates on Spartan Poker featured tournaments as well as other top tournaments from around the world, stay tuned to GutshotMagazine.com!