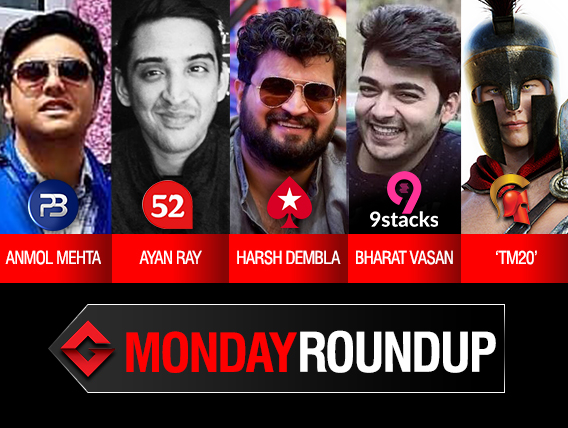 The virtual felts were exciting on Monday with several mid/high stakes players entering and strengthening their poker bankrolls. Undeniably, the start of the week pulled pros and several newcomers who were seen excelling throughout. Here is a sneak peek of the day…

Among the leading online poker sites in India, always coming up with the best to offer their loyal users, Spartan Poker hosted ReCharge, scheduled for each Monday. It wasn’t typically Monday blues, because a field of 581 entries was recorded with each paying a buy-in of INR 2,200.

The 7-hour long haul ultimately came to an end and ‘TM20’ powered through the field to grab the biggest share in the prize pool. He beat ‘TurnYourAce’ in heads-up, eventually settling for the runner-up position.

The tournament ended 3 am on Spartan Poker and before that the top places received a paycheck including Kanishka Samant aka ‘Wildflower’ (27th), Kunal Sharma aka ‘cvc (29th), Sahil Mahboobani aka ‘HomelessOnWiFi (36th), Ankur Sehgal aka ‘Crimemastergogo’ (38th), Siddarth Singhvi aka ‘PeterPunter’ (55th) and so on.

Online regular player Anmol Mehta playing under the username ‘anzzzzz’ who triumphed yesterday’s featured tournament The Bout INR 10 Lakhs GTD hosted by PokerBaazi. After firing three bullets, he was awarded the first-place prize money of INR 2,39,064 and beating ‘parna007’ in heads-up to add a valuable title.

The field was lit with some of the prominent faces in the country who ran deep enough to cash including Sagar Choudhury aka ‘sagarpupul’ (3rd), Neeraj Kuamr aka ‘SelfClaimedPro’ (4th), Kaushik Tibrewal aka ‘kaushik1989’ (6th), WSOP bracelet winner Aditya Sushant aka ‘gangajal’ (7th), Honey Bijlani aka ‘ho9ey’ (11th) and so on are also frequent on PokerBaazi.

Mondays are often heavily scheduled in the country, yet the featured tournament Goa Fest hosted by Adda52 saw a field at 8 pm with each player entering for a buy-in of INR 4,000. After a 5-hour long intense grinding, the title went to the online crusher Ayan Ray aka ‘gutshotguru1’ who took home prize money of INR 2,34,707 after beating Karan Radia aka ‘Reg_Slayer’ in heads-up.

Ray maintains a strong live record playing in the UK back in 2014-2015, with a few final tables and a title as well. With this win, the champion added another major title to his online journey.

Each player chipped in INR 3,300 buy-in to enter the tournament at 7:30 pm. A well-known player across the online and live felts, Harsh Dembla aka ‘kakori kabab’ shipped Monday’s featured tournament at PokerStars, walking away with INR 1,02,333.

The graphs clearly show the fate of the champion, playing below the average stack, Dembla, however, managed to make a major comeback after 6 hours into the competition, rising above the average chip stacks to ultimately coming out with flying colours. In the final hand of the tournament, the players including Dembla and ‘Wanabepro299’ settle for a deal. The runner-up bagged INR 1,02,271.

With total live earnings of over $25k, the winner was seen to have finished 9th in the 2018 Manila MegaStack 10 Main Event additionally, recorded a 9th place finish and his career-best live cash in 2018 WPT India Main Event for INR 6.63 Lakh.

After all that had been churning on a Monday night, 9stacks (Signup with code GUTSHOT) hosted StackUp guaranteeing 2.5 Lakhs. The 5 and a half-hour-long tournament saw…

The guarantee was passed to create a prize pool of INR 2.7 Lakhs which was later shared among the top finishers receiving a paycheck. Bharat Vasan playing as ‘rungooserun’ powered through the field, claiming the day to ship the tournament ultimately taking away INR 72,150. Vasan beat ‘Wickedjeet’ in heads-up. Notabely, the PokerStars Monday Hustle winner Dembla finished 3rd in the tournament bagging INR 36,075.

For latest updates on poker news around the world keep reading GutshotMagazine.com and stay tuned!