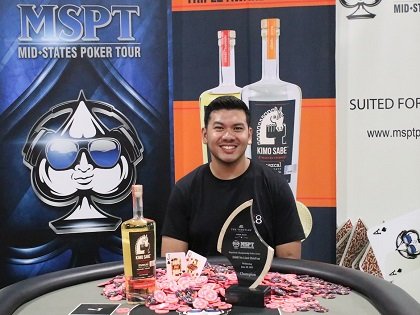 While everyone’s got their eyes on the 2018 World Series of Poker, other major poker events are also taking place on the Vegas strip. One such tournament was the Mid-States Poker Tour’s (MSPT) recent event at the Venetian DeepStack Championship Poker Series at The Venetian Las Vegas.

The $1,600 Main Event had an advertised guaranteed prize pool of $3 million, but a massive field of 2,877 entries was recorded that took the prize pool way past $4 million and at the end of it all, it was Malaysian poker pro Michael Soyza who topped this field and emerged victorious, taking home $588,249 for first place.

Soyza is a well-known pro in the Asian poker circuit, with several Asian titles, including the recent APPT Korea Main Event title, which he won in April 2018. However, the stakes are lower in Asian tournaments and this MSPT tournament win has turned out to be the biggest of his career, taking his live poker winnings over $1.8 million.

“Very long day, I started in the middle of the pack but ran really hot the first level. I had aces against kings, jacks against nines, and tens against eights. I just played my game and ran pretty damn well at the end as well,” said Soyza after beating France’s Jeremy Saderne in heads-up.

Soyza and Saderne began heads-up almost level in the chip counts, but Soyza slowly built a very commanding lead and it wasn’t too long before it was all over; Saderne’s 10-9 wasn’t good enough for Soyza’s Q-J in what turned out to be the final hand of the tournament.

This big tournament win may also give Soyza the confidence to buy-in to bigger tournaments at the World Series of Poker. Keep reading GutshotMagazine.com for all updates on such poker tournaments from around the world.