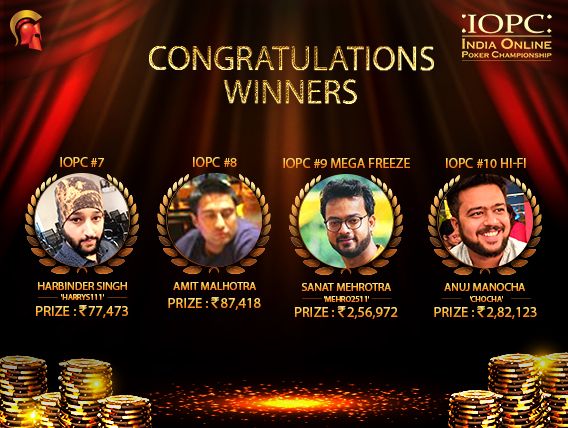 A couple of nights back, Spartan Poker launched another edition of the India Online Poker Championship (IOPC), which is nothing but the biggest online poker series in India. Day 1 saw all tournaments passing the advertised guarantees and Guruprasad Gupta being the biggest winner of them all, shipping the IOPC Sunday SuperStack.

Yesterday was Day 2 of this edition of IOPC where a total of INR 11+ Crore is guaranteed in prize money. 5 tournaments were scheduled on Day 2 and the featured tournament of the day was the IOPC Mega Freeze which was taken down by Sanat Mehrotra. There were other winners too and you can get all updates of IOPC Day 2 below…

As usual, we began the series with a smaller tournament that had a buy-in of just INR 550. A field of 744 entries registered to the tournament to take the prize pool all the way up to INR 3.72 Lakh, which was eventually distributed among the top 55 players – min-cash of INR 1,822. When heads-up arrived, we had ‘muck_you’ pitted against Samay Modi aka ‘Limitless’ and the former had managed to create a chip lead of nearly 6:1 by the time the final hand took place. Here, Modi re-raised all-in pre-flop with Th Ah and muck_you made the call with Qh 9h. The favourable board of Qd 5d 8c 9c 7h saw muck_you hitting two pairs and taking down the tournament for INR 72,168. On the other hand, Modi claimed INR 45,756 for finishing second.

The guarantee stayed the same for the second tournament of the day but the buy-in went slightly higher up to INR 770 as 552 entries participated to break the guarantee once again and create a new prize pool of INR 3,86,400. The spoils were shared among the top 39 players with a min-cash of INR 2,666. The eventual winner turned out to be Harbinder Singh aka ‘Harrys111’ who outlasted this field and made a decent bankroll addition of INR 77,473. In heads-up, he went past ‘nawazawaz’ and the latter had to settle for INR 51,507 after his pocket Eights couldn’t stand against Singh’s Kc As on a board of 9s Jc Ac 6h 9d after a pre-flop all-in.

The buy-in rose up again, this time to INR 880 and here, 545 entries registered to bring the prize pool up to INR 4.36 Lakh, with all eight tournaments so far crushing the promised guarantees. Only the top 39 players from this field were paid out with a min-cash of INR 3,008 and from them, Amit Malhotra ended up being the most successful, shipping the event for a decent pay-out of INR 87,418. In heads-up he was pitted against ‘crownupguy1’ who had to settle for the runner-up prize of INR 58,118. The last hand was a PFAI situation where Malhotra’s pocket Tens hit a set on the flop against crownupguy1’s Kh Ad, who only managed Kings and Sixes.

Gutshot contacted the winner to ask him about the experience and he said, “I can say that am not a regular on Spartan Poker but on other sites. This is my first win in just 2-3 tournaments that I’ve played at Spartan. It was a terrific experience. IOPC on Spartan is too huge a series to be missed by regular online players and it seems to be very well organised. It’s an awesome opportunity for all to show their class.”

This is a weekly feature tournament that is played every Monday on Spartan and once again, there was the usual buy-in of INR 5,500 in this popular freezeout event. 243 players registered and here, there’s no coming back once you’ve busted. Eventually, the top 31 players were paid out from the INR 12.15 Lakh prize pool, each receiving a minimum of INR 10,692. Sanat Mehrotra aka ‘mehro2511’ is a regular winner across online platforms and he managed to get himself a victory here on Spartan Poker too, shipping Mega Freeze and adding INR 2,56,972 to his poker bankroll.

Gutshot reached out to Mehrotra regarding this win and he said, “Mega Freeze is one of the biggest freezeout tournaments in online poker in India, and that has a big change in the way players play as there is no re-buy. It was a relatively easier win as I led the field right from the point that there were 50 players remaining. The toughest part was playing heads-up as that lasted for around 45 minutes which is a lot for online play. I’m happy to see it through. Congrats to the other players who cashed as well.”

This was the final tournament of IOPC Day 2 and this being one of the most popular daily tournaments on Spartan Poker, the guarantee was passed again making it 10/10 so far in IOPC, with 729 entries each paying INR 2,200 to create a new prize pool of INR 14,58,000. Anuj Manocha plays as ‘chocha’ on Spartan and he was able to outlast this entire field on the night to go on and ship the title, bringing home INR 2,82,123 as first-place cash prize. In heads-up, he went past ‘Dragon Kewe’ beating him with Queens and Nines in the final hand. The runner-up pocketed INR 1,77,876 for his deep run. Manocha expressed himself after the victory, saying, “It was a high value tournament with a low buy-in. I’d like to say thanks to Spartan Poker for giving such opportunities to mid-stakes grinders like myself to get big scores.”