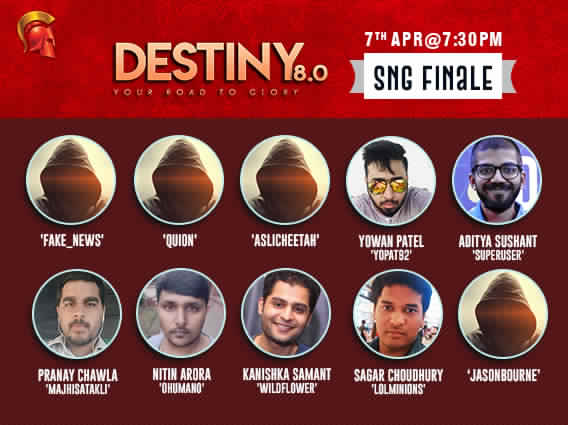 
Destiny is one of the top offerings in the Indian online poker scenario. Hosted by Spartan Poker, the series, on 27th March, concluded the last tournament of its 10-strong line-up for the Destiny 8.0 edition. The series is special because it offers a whopping INR 10 Lakhs Europe package to the winner of the SNG.

The previous Destiny run was a grand affair. A player only known by ‘GTOsucks’ won the Europe package and revealed himself to be acclaimed pro Sriharsha Doddapaneni. He subsequently made the EPT Sochi trip and ran deep in the Main Event, finishing 26th for ~8.39 Lakhs.

There are 4 finalists who haven’t revealed themselves and all are regular Spartan players so its highly likely that one of them pulls up the curtains on their identities. Other finalists include heavyweights like Aditya Sushant, Kanishka Samant and Sagar Choudhury. Here’s introducing all the 10 SNG finalists:

This player won the first tournament in the present edition on 23rd January 2019 for ~INR 7.12 Lakhs. He/she has finished in the tops in many previous Spartan tournaments and is a regular player. There is a good chance of this person revealing himself/herself after the kill-shot is achieved tomorrow night.

‘Quion’ won the 2nd Destiny 8.0 tournament on 30th January for INR 6.89 Lakhs. The name has been spotted quite a few times in ITM finishes on Spartan. The person behind this name looks like a pro and could prove to be a tough challenger on the SNG table.

This player won the SNG seat on 13th February. The tournament was hosted as part of SSS with a boost in its guarantee. ‘aslicheetah’ took home INR 8,55,400 as the first-place cash prize back then. The player might reveal himself after winning the package.

Patel aka ‘Yopat92’, after many close attempts at winning this tournament, finally won 6th February’s Destiny. He earned INR 6,77,075 as the first-place cash prize. The Chennai-based pro told us then, “I finished runner-up in Destiny twice earlier so shipping this one was a great moment for me.” Patel has proved his mettle when it comes to persistence, one of the key qualities to have when playing this game. He will unfailingly offer a good challenge on the SNG table.

India’s first WSOP bracelet winner will grace the SNG on 7th April too. Sushant won Destiny on 20th Feb beating 509 entries. He made a deal with Sahil Mahboobani in HU where he took the SNG seat, the title and the bigger chop amount. Apart from his bracelet win back in 2017, his recent achievements include live titles from 2018 WPTDS India, APT Finale and BLT. On online felts, he recently won 5 For 5 last month and won the Highroller on PokerStars India.

Chawla became the 6th entrant into the SNG in the last Destiny of February. He earned INR 5,00,009 as first-place cash prize after a HU deal with Ashish Munot. At the time he said, “…this is the tournament that I wanted to win the most because of the potential opportunity to bag the Europe package, thanks to Spartan.” He won major titles in the past. The recent IOPC saw him winning a title. He also bagged the LBS ME and the leaderboard previously and is strong contender for the SNG. Let’s not forget, he was the star at PokerBaazi’s recent Game Changer.

Arora booked his SnG seat on 6th March playing under ‘0HUMAN0’. He won a Destiny tournament before, in its 5th iteration and converted it into the awesome package by winning the SnG too. He is the only player to enter this edition’s SNG already being a past SNG winner. He told us after his win last month, “Destiny is one of the best tournaments currently offered among all websites.” He must’ve already figured out his action plan and will be all set for the Destiny 8.0 Finale.

Samant fared well on virtual felts and especially on Spartan since the beginning of this year. He earned his Destiny SNG seat on 13th March for a good amount. He then went on to win Spartan’s biggest weekly offering Sunday SuperStack on the final day of last month. Samant also won IOPC Elite in January for a humongous cash prize. He’s a good live player as well and has years of experience to his name, just like some of the other finalists on the table.

Choudhury won the Holi Special SSS Destiny on 20th March. Playing under ‘lolMinions’, he earned ~INR 7.69 Lakhs for his victory and bagged his seat into the Finale. Choudhury has a good record to his name and has feature titles like Spartan Elite, DareDevil and PokerBaazi Summit in his cap. He has a strong virtual presence and could be the happy winner of the package.

This player shipped the final Destiny 8.0 tournament and earned ~INR 5.66 Lakhs as the first-place cash prize. He entered the Destiny 8.0 SnG as the final player. The player has frequently finished ITM in many previous tournaments on Spartan and looks like a pro. He/she might even reveal identity after bagging the package.

The SNG will begin tomorrow and all the 10 finalists’ prize monies have been deducted by INR 1 Lakh to fill the INR 10 Lakhs package. The tournament will start at 7.30 pm sharp day after tomorrow. Keep reading GutshotMagazine.com for more such tournament updates and for general poker news from around the world.