There is much cause of cheers among the poker enthusiasts of the country as the New Year brings in a massive windfall in terms of amazing poker offerings from the IPC! It’s going to be a triple whammy for the month of January as three tremendous properties from the IPC stable will feature at different points of the month. Not only will we see the next edition of the IPC live tournament series return to Goa but that will soon be followed by the ever popular India Online Poker Championship (IOPC) which like the live event will offer mouth-watering guarantees. How much you ask? There will be over 21 Crores in guaranteed prizes on offer across both of India’s premier live and online tournament series! And to add an extra bit of sparkle, we will also see the third edition of the India Poker Championship Awards take place in January 2020.

The IPC has always held a special place in the pages of Indian poker history. Over the years the brand has earned the goodwill of thousands of players who have participated in its various editions. Despite going on hiatus a couple of times, the IPC made its comeback in a big way both times setting attendance records with every edition they did. This time too it’s going to be no different. After their return to Goa in September, the IPC will now begin the new year with its opening edition of 2020 set to take place from 14-19 January onboard Big Daddy Casino in Goa. The September edition had promised 3 crores in guaranteed prizes and the IPC crushed that by going well over 5 Crores in the series. This time around the organisers have amped up the guarantee for the January to INR 5 Crores! We won’t be too surprised if this new year edition of the IPC goes on to crush previous records for prizepools and attendance. And the biggest surprise coming your way is that Moneycontrol joined hands with IPC as its Presenting partner for Jan 2020! 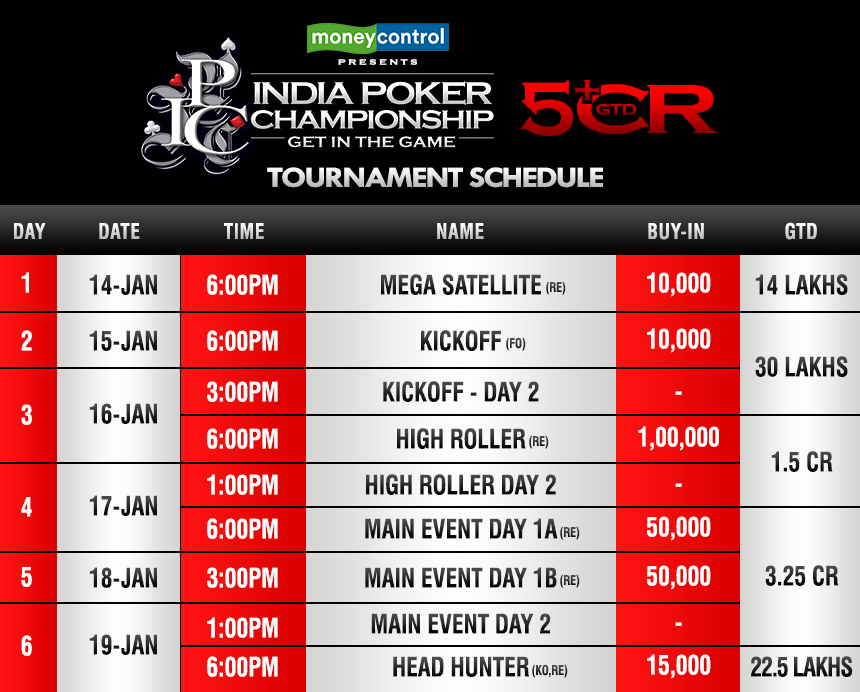 The highlight of the series will be the IPC Main Event, which has a higher buy-in of INR 50,000 this time around. The winner of this prestigious Main Event will be crowned the India Poker Champion of the 2020 season. So not only will there be tremendous cash prizes to compete for but also the honour and glory of being crowned as the national poker champion of India!

And there is barely any breathing room for poker enthusiasts as the IPC’s online avatar, the India Online Poker Championship (IOPC) will soon set the virtual felts at SpartanPoker.com ablaze. The IOPC is recognised as India’s biggest online tournament series and has had record breaking turnouts and prizepools with every edition it has done since its inception in October 2015. To give you an idea of its phenomenal growth trajectory, IOPC Oct 2015 had 26 tournaments offering 8.6 Lakhs in guarantees. 4 years later, the IOPC Jan 2020 edition will feature 100 tournaments and a mammoth 16 Crores in guaranteed prizes! Not only is this an indicator of the popularity and growth of the IOPC, but it’s a significant representation of how far poker as a game itself has come in terms of being the mind sport of choice for this generation of card players.

The IOPC will take place at Spartan Poker from 24 January to 09 February and if it’s last edition is anything to go by, we can surely expect yet another guarantee crusher of a series this time around as well.

After two spectacular editions in previous years, the IPC Awards will return in January to celebrate the achievements of the best poker players in the country. It will be a night of excitement, celebration and revelry where the best of the best will be recognised and felicitated in front of the industry professionals as well as their peers for their accomplishments in the previous season. The inaugural edition of the IPC Awards took place in Bangalore’s Sheraton Grand hotel two years and last year saw it take place in the Sahara Star hotel in Mumbai. The upcoming edition of the Awards will take place in Goa onboard the Big Daddy casino. This extravaganza will be part of the IPC tournament series and will in fact take place on the opening day of the series. It promises to be a night filled with pomp, pageantry, revelry and even nostalgia as many faces, old and new, will be part of these festive celebrations and will rightfully make for a wonderful precursor to what should be a record shattering IPC tournament series.