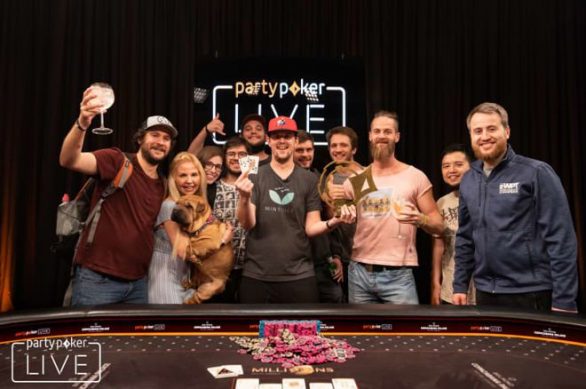 A total of 439 unique players turned up for the Main Event which had $5 million in guaranteed prize pool. Of those 439, only 55 received a pay-check after the conclusion of the event. The likes of Jack Sinclair, Tom Middleton and Manig Loeser. Patrick Leonard was also in the mix and cashed in at 10th place for $60,000.

Day 4 of the event conducted day before yesterday saw the field whittling down to the Final Table of 8. Andrew Busato busted first on the FT at 8th by Matas Cimbolas’ hands who had Kings over Ace-queen of the former. Cimbolas busted Michael Sklenicka next at 7th on the same day.

Day 5 yesterday started with the final players contesting for the top prize and all were guaranteed $250k and the first to fall on the day was Brazil’s Caio Hey. Gradually the 3-way was reached. They all went on a 40-minute break to discuss a possible deal for the remaining prize pool and was eventually reached, leaving $212k for the champion.

Mathis proceeded to bust both of his opponents then. Cimbolas fell at 3rd place by Mathis’ turned spade flush over the former’s Fives. Entering heads-up, Mathis had 96 big blinds against Bruno Volkmann’s 80, so the contest was fought tooth and nail. In the final hand, Volkmann shoved his stack with Queen-two and Mathis called with Queen-eight. The board proved indifferent and Mathis collected the pot and the title with the higher Eight kicker.

Keep reading GutshotMagazine.com for more such tournament updates and results from around the world and for general poker news.