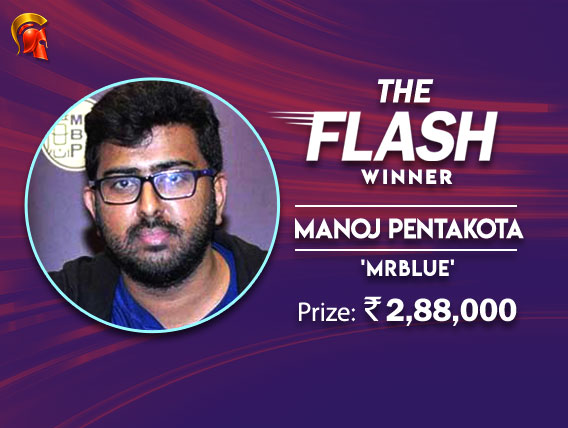 Manoj Pentakota takes down The Flash on Spartan

Every night, The Spartan Poker hosts featured online poker tournaments for their players, with varying buy-ins, guarantees and structures. Yesterday being a Thursday, The Flash INR 12 Lakh GTD was contested between players from around the country, with a buy-in of INR 4,400 and a kick off time of 7:30pm.

A tough field would’ve been expected as most players would’ve had the day off due to the Diwali holiday and that’s exactly what we noticed yesterday in the 234-entry strong field. Plenty of pros were part of the action but eventually, only 20 of them were paid out, with a minimum cash prize of INR 16,080.

The festive occasion would’ve made a victory even more special for any of these players and the first to receive a cash prize on the night was Shravan Chhabria aka ‘D.Trump04’, who busted in 20th. The competition got more intense and another top player busting along the way turned out to be Gokul Raj aka ‘Super Kings’ who finished 9th a couple of nights after his Mega Freeze victory on Spartan.

Bhanu Prakash aka ‘spectre’ is also another very familiar name who those who play on Spartan and he made a deep run as well, busting in 6th place for around INR 67k. Very soon, another popular pro in Anirban Das aka ‘pokernoob’ also hit the rail, busting in 4th for INR 1,06,560, becoming the first player to secure a 6-figure score on the night.

Next was Aniket Waghmare aka ‘Anteman’ who busted in 3rd place for INR 1,29,000. This guy has been having a brilliant run across all major websites, last week winning The Vegas on PokerBaazi. After Waghmare’s exit, heads-up began between Sathish Ananth R aka ‘Jaqkten’ and Manoj Pentakota aka ‘MRBLUE’.

We knew it was going to be a good battle as Pentakota is a very well-known name in the Indian poker industry, with plenty of achievements in live and online poker. He is also known for being the first winner of Spartan’s signature tournament, ‘The Millionaire’. Sathish Ananth has also been on a good run, just last week winning the first tournament of Destiny 7.0.

It was a good battle between these two players last night, but the more experienced player, Pentakota, emerged victorious after his pocket Deuces improved to Twos full of Tens in a pre-flop all-in situation which turned out to be the final hand of the tournament. Pentakota thus took away INR 2,88,000 for first place while Ananth settled for INR 1,95,600 for finishing second.

When Gutshot spoke to Pentakota about this victory, he mentioned that Aniket Waghmare (Anteman) was his toughest competitor in the tournament. He also added, “I am a recreational MTT grinder these days, but poker for me is a never-ending grind. You can’t quit while in a down swing and can never stop playing while winning.”