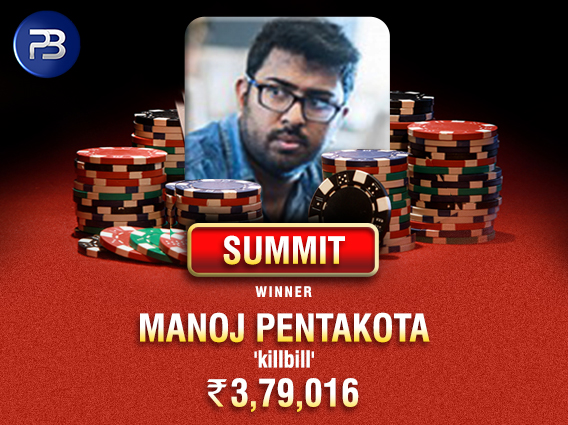 
PokerBaazi is a brand that’s well-established in the Indian online poker scenario. However, no one can deny that the company has been seeing great success in the industry recently. The deserved success comes from hosting some of the most special tournaments in the scene like last month’s Game Changer which literally delivered what it had hoped to and more.

Among PokerBaazi’s regular feature tournaments is The Summit INR 15 Lakhs GTD. The tournament is hosted onThursday evening on the platform. Last night’s Summit started at 8 pm sharp on the site, the usual time, and ended at 3.12 am today morning. It attracted a field of 265 entries (including 131 re-entries), each coughing up the INR 8,250 buy-in to crush the guarantee. The resulting prize pool created was INR 19,87,500 out of which the top 47 places were paid, min-cash being INR 13,117.

The player to overcome this tough field and a tougher Final Table was acclaimed online grinder Manoj Pentakota aka ‘killbill’, taking home INR 3,79,016 as the first-place cash prize. He beat ‘TheHungryKid’ in heads-up to secure his victory and the latter grabbed INR 2,68,312 as runner-up cash prize.

Pentakota has been playing poker since a long time and is a reputed community entity. He won Spartan Poker’s Millionaire’s first ever iteration back in 2015 for INR 10 Lakhs, a huge deal in those days. He subsequently registered a lot of wins and deep runs in multiple online offerings like Spartan Elite, PokerBaazi PPL ME, SSS PLO HR and Spartan Flash. He even won Spartan Mega Stack in January and began his year on a good note. This win will see him add a significant amount to his bankroll. He briefly spoke to us after his win saying, “It feels good to finish 1st for a change after falling short many times on the Final Table.”

Keep reading GutshotMagazine.com for more such tournament results, roundups and for your daily dose of poker news from around the world.