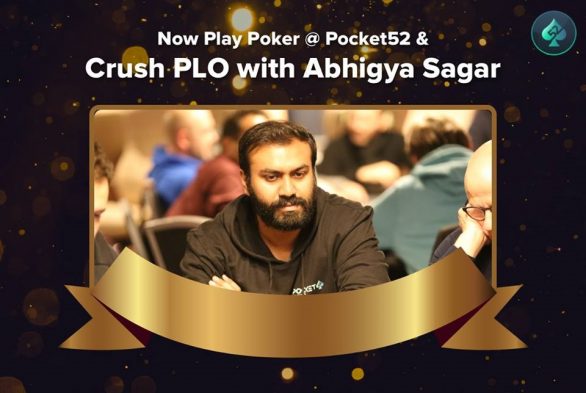 
Pocket52 started operations in December 2018 and have since then invested heavily in marketing, so it looks. They have been busy conducting live tournaments in various colleges across India, most recently at IIM Kozhikode. They also recently announced the ‘Pocket Vault’ promotion which is gradually gaining pace in the market.

The promotion is basically where points, in this case, ‘Pocket Coins’ are generated based on a number of factors while playing on the site. These points can then be redeemed to earn some top-of-the-line prizes like luxury cars, bikes, smartphones, etc.

These rewards range from an INR 100 Amazon Gift Card to INR 90 Lakhs worth Range Rover Evoque and everything in between. Audi, BMW, Ducati, Toyota, Jeep, Honda, Hyundai are some of the vehicles up for grabs on Pocket52.

One of those rewards is a chance to learn from renowned PLO expert of the country Abhigya Sagar aka ‘KOCairna’. The package is called ‘Crush PLO with Abhigya Sagar’ and for 2,000 Pocket Coins, you can also claim this reward on Pocket52. The original price of the deal is 2,900 Pocket Coins but it will be given at the discounted rate mentioned above only till 30th April so hurry up before its too late.

Coming to Sagar, who also is listed on the company’s site as an angel investor, founded Noble Aces, a poker website in the country back in 2015, is a PLO expert with 9+ years of experience playing poker. He is ‘one of India’s biggest PLO cash poker players’ according to Pocket52. The training session will be conducted by Sagar himself and will be for the duration of an hour.

PLO or Pot Limit Omaha is a variant of poker, less popular than No Limit Hold’em (NLHE) but nonetheless has carved its niche. In PLO, a player gets four hole cards instead of two in the traditional NLHE, hence there is greater scope for play in this format.

Players who are looking to make a mark in the industry can use Sagar’s years of experience and train themselves using Pocket Coins earned on Pocket52. Keep reading GutshotMagazine.com for more such updates and for general poker news from around the world.

You can Sign-up now using code “GUTSHOT”  to avail bonuses starting from INR 1,000, promotions, and exciting new academic content like the ‘Churn Sessions’  and much more.