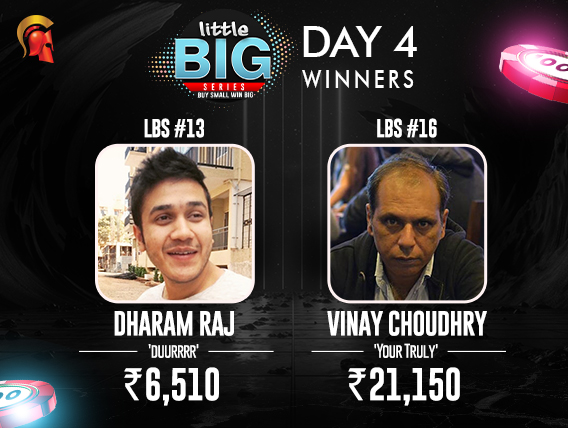 
Spartan Poker had announced the Little Big Series (LBS) for this month and the series began on 22nd April. The 6-day small-stakes festival is already garnering significant numbers till now. It will be in the books by 27th April and will also feature the Main Event INR 6 Lakhs GTD for a buy-in of INR 1,100. Day 5 was hosted yesterday and had 4 events lined-up. Here’s a round-up of those:

The day began with a PKO format tournament, bringing in a total of 140 players from all over the country for INR 110 buy-in. The top 23 places were paid out of the prize pool and emerging victorious in the tournament was Dharam Raj aka ‘duurrrr’ who took home INR 6,510 beating ‘blablahlala’ in heads-up.

We contacted Raj after the win and he said, “The journey wasn’t that easy especially when I had joined late and had to best out 164 people. The grind went on for about 4 hours and the most surprising part was that I had the longest heads-up in my career with blablahlala and we both had about the same stack. He almost busted me and left me with 120K stack but then I got a real close shave with A10 and AK where my luck helped me out.”

Raj added, “l was  a little depressed that I had come in 2nd place in the same knockout LBS series and regretted that I couldn’t be 1st so I made up my mind that I must ship it this time. And of course it wouldn’t have been possible without a platform like Spartan for players like me to excel at every step.”

Next in line was a bigger tournament with INR 165 buy-in. The tournament attracted 135 players with the top 23 places being paid with the min-cash being INR 696. ‘pagal27’ earned the title and the first-place cash prize of INR 13,950, beating ‘Betset’ in heads-up. In the final hand, pagal27 slashed his opponent with Sevens trips over Sevens.

The next tournament had the same guarantee as the previous one, but with a bigger buy-in of INR 220 and was played in the PLO format. The top 17 places were paid out in the tournament with the min-cash being INR 942. Bagging the title and the first-place cash prize of INR 15,096 was ‘Harsharya’, who beat ‘JungleJam’ in heads-up. The latter settled for INR 10,200 after getting defeated by Harsharya’s set of Jacks over two pair.

Vinay Choudhry aka ‘Your Truly’, who had bagged the LBS #7 title on 23rd April made a double yesterday by shipping the biggest one in the series, LBS #16 for INR 21,150 as the first-place cash prize beating ‘Youraiseishove’ in heads-up with Queens and Threes over Threes. Choudhry, who is a fairly-known player of the community, recently won a title in this month’s Spartan Super Series. We even had an exclusive interview with Choudhry in September last year where he touched upon a lot of relevant topics.

Day 5, the penultimate day of the series will begin today and a total of 4 tournaments are lined up, the biggest being Warm Up INR 2 Lakhs GTD at 4 pm for INR 550 buy-in. Stay tuned to GutshotMagazine.com for more such tournament coverage from local websites and for general poker news from around the world.