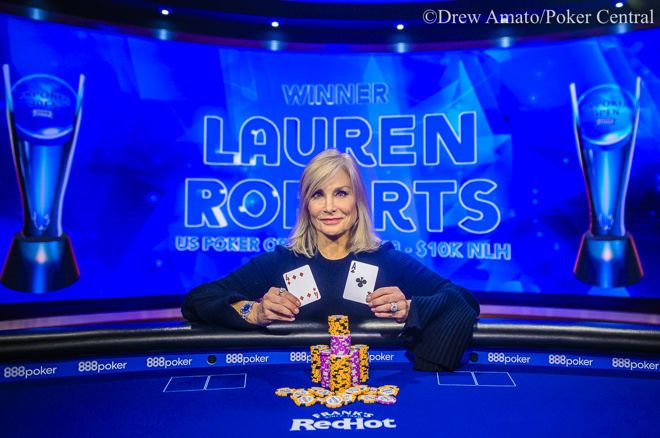 
The ongoing 2019 US Poker Open (USPO) is the second edition of an annual high-stakes tournament series organized at the ARIA, Las Vegas. Just recently, the third tournament of the star-studded affair has come to an end, with USA’s Lauren Roberts emerging victorious for a career-best live cash.

Roberts had to go through a strong field to get the title, and she now also becomes the first ever female champion in USPO history, which is good for this mostly male-dominated sport. She beat a field of 91 entries here at USPO Event #3: $10,000 No-Limit Hold’em.

Prior to this victory, she had just below $500k in live cashes, but has now made a healthy addition of $218,400 (~INR 1.56 crore) to her bankroll, and she may even try to contest for the USPO Championship. In heads-up of this tournament, she beat German pro Koray Aldemir, who took away $159,250 in prize money.

After this victory, Roberts said, “It’s huge for me. I mean I’ve never won anything before. And so especially for women or old people and for amateurs. I love this game, I played with some phenomenal players and I learn every time I play a tournament. I happened to run good in some of these coin flips and they can make or break a tournament.”

Also in the mix for quite a while was UK’s Stephen Chidwick, who has been one of the best USPO players so far, having won the Championship last year as well. This year, he made his second Final Table in three tournaments, eventually finishing in 3rd place for $113,750.

Quite a few more tournaments are to be played in the 2019 US Poker Open and you can get all updates on the same here at GutshotMagazine.com.