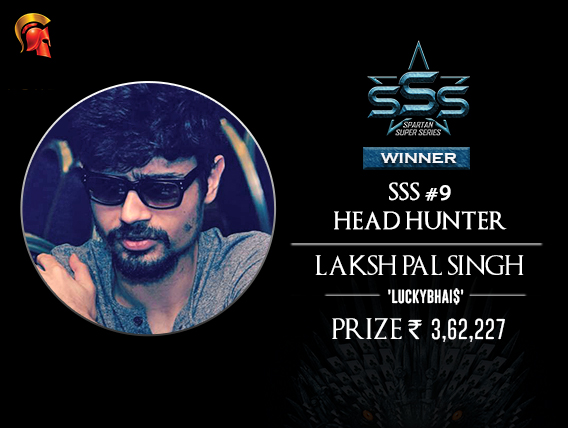 
This month’s Spartan Super Series (SSS) began on 10th April and will end on 14th. The 5-day festival is studded with marquee events like The Elite INR 50 Lakhs GTD and the Main Event INR 75 Lakhs GTD. Yesterday, Day 2 of the series was hosted and saw ‘illegal9’ winning two tournaments who also currently ranks 2nd in the Leaderboard. Another Spartan Poker regular ‘JasonBourne’ won the biggest event of the day. Here’s a round-up of what happened:

Last night, Head Hunter began at 7.30 pm and was in the books by 2.39 am today morning on Spartan. The community was so enthusiastic about this one that the 365 total entries crushed the guarantee by a good margin of INR 2.6 Lakhs. The top 31 places were paid out of this prize pool and conquering the title and the first-place cash prize was community regular Laksh Pal Singh aka ‘LuckyBhai$’ who took home INR 3,62,227 (including INR 53,437 bounty).

Singh beat another known community entity Gaurav Sood aka ‘mozzie17’ in heads-up. The fateful hand happened with Singh owning over 2:1 chip lead. Singh had Js Qs and raised all-in before the flop and Sood called with As 9h. The board revealed 9c 8d Qh 5h Tc and gave Singh an Eight to Queen straight, which beat Sood’s Nines easily. Sood settled for INR 2,07,904 as the runner-up prize money.

Singh is already a good player in the live and online circuit of India. Among his recent achievements include Spartan SuperStack title which he won last month. He will look forward to using this money in upcoming range of tournaments and earn more.

This was the first tournament of the day and attracted a total of 203 players to the felts for INR 550 buy-in. Topping the field and earning INR 47,693 as first-place cash prize was ‘THEDONKKID’ who beat ‘instacash’ in heads-up. The min-cash for the tournament was set at INR 1,984 and a total of 31 places were paid out of this.

The tournament was 2nd in the list of offerings on the day and drew in a total of 159 unique players to the felts. ‘illegal9’ won this one for INR 68,737 and earned his first out of 2 total titles he would win on the day. He beat ‘UnderCover’ in heads-up to secure his victory. In the final hand, illegal9 beat his opponent with a straight over two pair.

The last tournament of SSS Day 2 saw 194 unique players attracted to the virtual felts. The prize pool crushed the guarantee by a good margin and brought it to INR 6,39,000, out of which the top 31 places were paid. ‘illegal9’ shipped this tournament for INR 1,35,148, beating ‘CommoN_MaN’ in heads-up, who settled for INR 90,993. With this win, illegal9 is also currently 2nd on the SSS Leaderboard, after ‘JasonBourne’.

Keep reading GutshotMagazine.com to know the results of Day 3 of the SSS which will be hosted today and for other such news from around the world.