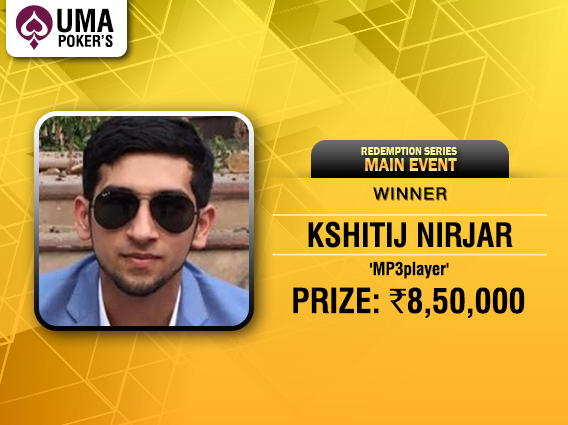 The Main Event INR 50 Lakh GTD was held yesterday on the platform and as expected, we saw some regulars playing and running deep as well. With a buy-in of INR 7,700, a healthy participation of 435 entries was recorded and from these, the top 43 were eventually paid out, with the grind going on for around 8 hours, finally ending early today morning.

There were a number of pros in contention but the player who emerged victorious and hogged all the limelight was a lesser known player called Kshitij Nirjar, who plays on Uma Poker under the name ‘MP3player’. He will be over the moon as he ended his weekend with a major payday of INR 8,50,000!

Some of the known names to cash in last night’s Main Event include Pranav Anand aka ‘pornoveloO’, GB Prasad aka ‘f1sh’, Swastik Sikka aka ‘iamnoone’, Bhuvan Chaddha aka ‘drpoker’, Sanjeeta Kumari aka ‘realkidsanju’, and Shekhar Sood aka ‘shek150’. Top names like Kartik Ved aka ‘ashwathama’ and Shravan Chhabria aka ‘acesup44’ also finished in the money with prizes of INR 50k each.

Gutshot contacted the winner to know how he feels regarding this big win, to which he said, “I’m really ecstatic to win such a huge amount. I had a decent stack throughout the tournament, though like always the grind was tough. Got a couple of bad beats at the mid stage, came back right up from there. The field also felt a little bit tougher than how it usually is on Uma Poker. Faced a couple of disconnections too, at the ending stages, nothing that game breaking though. All in all, it was a good experience, this was only my 3rd tournament at UMA, so I’m glad I could make it count”

For more updates on the biggest tournaments on Uma Poker as well as other platforms in the Indian poker circuit, keep following GutshotMagazine.com.