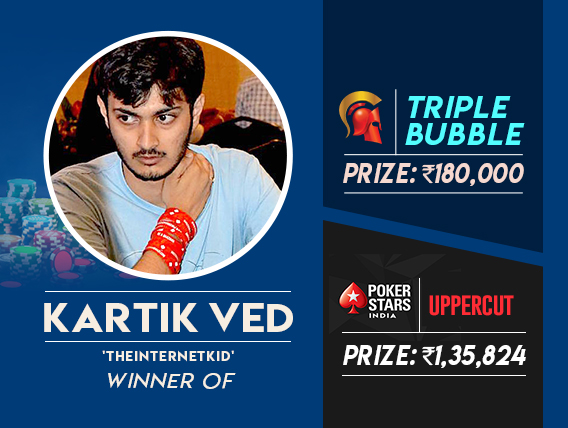 Kartik Ved ships Triple Bubble and Uppercut in one night


When you talk about online poker in India, there are some players who excel much more than the rest, regardless of what the platform is. Top poker companies always advocate poker as a game of skill, but these consistent players do a better job at pushing out this fact. If it wasn’t a skill game, how do they manage to win so often? Wouldn’t we see new winners each day if it was all luck and chance?

The player in the spotlight this morning is none other than Kartik Ved, known across most online poker platforms as ‘TheInternetKid’. Winning titles online isn’t something new to him, but he always manages to surprise us and the rest of the community, like he did last night. Yesterday, he shipped Triple Bubble on Spartan Poker as well as Uppercut on PokerStars India, both of which ran simultaneously.

Triple Bubble is a Friday feature tournament on Spartan Poker, one which has three prize bubbles rather than just one. However, Ved didn’t have to worry about bubbling anything last night, as he powered through the total field of 211 entries, each of which paid the INR 3,300 entry fee to participate.

The top 20 places were paid out a minimum cash prize of INR 10,050 each, but Ved had eyes only for the top prize. It was a tough FT for the poker pro, but he overcame it eventually, taking away the top prize of INR 1,80,000. In heads-up, he got past another regular Spartan grinder Rohit Mishra aka ‘ShippingYard’ who had to settle for a prize of INR 1,22,250. The 4.5+ hour grind ended at 12:16am this morning.

Both these players have considerably big wins on this platform in the past. As for Ved, one of his biggest online victories would be the Spartan Super Series Main Event triumph in November last year. Mishra is not too far behind, having recorded several wins on various platforms, winning the Highroller in that same SSS series.

PokerStars India has potential of being a market leader, especially after they recently signed Nawazuddin Siddiqui as their brand ambassador. Their Friday night feature tournament is Uppercut, which has a buy-in of INR 3,850 and a guaranteed prize pool of INR 10,00,000. This grind went on for much longer than Triple Bubble, eventually ending at 3:21am today morning.

223 entries participated last night and eventually, Ved settled for a 3-way deal on the Final Table. The deal saw eventual third-place finisher ‘Sooo Pure’ walking away with the biggest prize of INR 1,47,194. Madhav Gupta aka ‘madzoopa’ finished 2nd for INR 1,31,905 while Ved took home the title and a prize of INR 1,35,824.

Ved seems to have begun his weekend well and can enjoy his Saturday night tonight, unless he wishes to grind some more and win some more. For all updates on the Indian poker scene, both online and live, keep following GutshotMagazine.com.