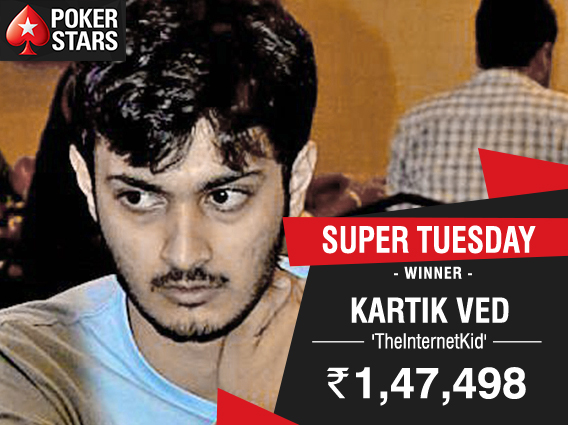 
PokerStars India began its operations in April of last year and deepened its roots firmly in the market since then. The platform has hosted some marquee events in the past which have attracted a great number of top talents from around the country.

Given its popularity around the world, PokerStars India becoming a major entity in the Indian industry wasn’t in doubt. They even signed acclaimed actor Nawazuddin Siddiqui as their brand ambassador, following which they launched a country-wide ad campaign on TV channels, which was a first in the industry, thus setting a precedent for mainstream poker advertising.

Their regular tournaments also attract a fair number of players every day. Last night’s Super Tuesday INR 8 Lakhs GTD on the platform attracted 237 entries (including 113 re-entries) to the virtual felts. The tournament paid the top 41 places, out of which Kartik Ved aka ‘TheInternetKid’ bagged the top prize for INR 1,47,498.

Ved beat ‘CougarHunter69’ in heads-up to secure his victory. Ved is an acclaimed player of the industry and has many live and online cashes to this name from previous tournaments. He is part of PokerGuru Staking and he has trained numerous budding players.

Among his recent achievements include winning EPT Sochi Package on PokerStars, Spartan Triple Bubble and PokerStars Uppercut in one night, and most recently finishing 4th in EPT Sochi National for an awesome ~INR 32.7 Lakhs, with the free package he won on the platform.

Keep reading GutshotMagazine.com for more such tournament round-ups and results from around the world.