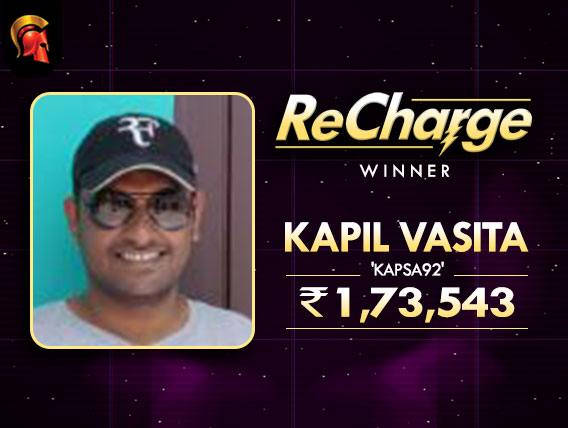 Spartan Poker is known as one of the industry leaders in online poker and it’s mostly because of the fact that they’re always trying and testing new offerings for their loyal users. Another new tournament they launched recently was ReCharge INR 10 Lakh GTD and this has been scheduled for every Monday at 8:00pm on their platform.

The tournament replaced the earlier Monday feature called Mega Freeze and this new one has a buy-in of INR 2,200 and a good participation of 536 entries last night took the prize pool to INR 10.7+ Lakh. This was then shared among the top 47 places with a minimum prize of INR 6,110 each.

Since it isn’t the biggest featured tournament of the week, we didn’t expect the field to have some of the best pros in it. However, the known names to finish in the money were Devang Yadav aka ‘equity_hunter’ (39th), Ashish Munot aka ‘Donkey 07’ (28th), Arsh Grover aka ‘BigggTymeR’ (21st), Siddhanth Kapoor aka ‘bullzeye’ (15th), Sumit Sapra aka ‘holla@yoboy’ (14th), Yowan Patel aka ‘PAPITO’ (14th), Siddarth Singhvi aka ‘PeterPunter’ (10th), and Sahil Mahboobani aka ‘HomelessOnWiFi’ (6th).

In heads-up, Kapil Vasita aka ‘kapsa92’ found himself in another winning position after he recently won two titles in the India Online Poker Championship (IOPC) last month. However, he was up against a good opponent in ‘FreeFlow’ and the players decided to cut a deal when they were more-or-less equally stacked towards the end.

After a grind of more than 7 hours, the two players shook hands at 3:11am this morning and since Vasita was ahead in chips, he was declared champion for which he took away a slightly bigger prize of INR 1,73,543. As for FreeFlow, he won INR 1,68,103 as his share of the deal.

For similar updates on online and live poker tournaments in India, stay tuned to GutshotMagazine.com.

Don’t have an account on Spartan Poker? Check out their review page here, and don’t miss out on their bonuses, promotions, and guarantee-smashing tournaments. Sign-up now.
Tagged : Kapil Vasita, Online poker, Recharge, Spartan