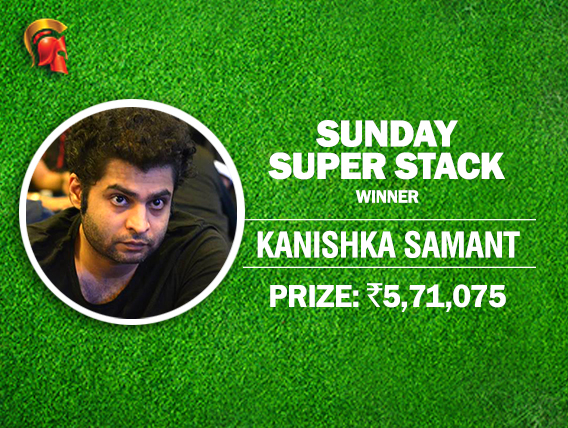 Kanishka Samant emerged victorious last night at The Spartan Poker in their Sunday SuperStack tournament winning INR 5,71,075 for his efforts. Samant outlasted 431 entries who made a prizepool of INR 21,55,000 which originally guaranteed INR 20 Lakhs. The prizepool was distributed to top 40 places with a min-cash of INR 12,930. Samant defeated ‘D.Trump04’ in heads-up battle and the latter collected INR 3,55,575 for the second place finish.

Samant, who plays as  ‘Wildflower’ online, is a 32-year-old resident of Mumbai who completed his M.Com followed by Masters of Finance from Welingkar’s Institute, Mumbai. Poker came to his life when he was traveling to meet his family in US in mid-2008 and his cousin’s friend had a poker table setup in his room. He ended up playing on Zynga on Facebook and when he picked up the game he started playing small stakes home games before making a move to tournaments in late 2010. At present, Samant plays cash games, majorly online. Along with live title wins at Aces Unlimited and India Poker Pros, he remains the only two time Main Event champion at the India Poker Championship.

Speaking with GutshotMagazine.com, Samant said, “Sunday grinds are always fun and even more so if you are able to close one out especially one of the majors. There were a lot of interesting hands through out, though on the final table with 6 left we were the shortest stack and went all-in with a stack of 12bbs with 33 and get called by AJ . Winning that hand allowed us to get into the middle of the pack once more and giving us a chance to win it from there on. Shout out to Nitin Jain and Shravan Chhabria for their runs too.”