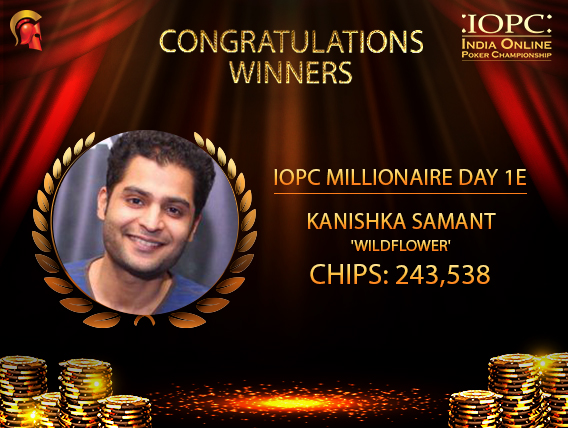 
Another day, another success at the India Online Poker Championship (IOPC). So far, thirteen days of fun-filled poker has taken place at Spartan Poker in this series. Lucky for some and unlucky for others, IOPC Day 13 concluded 5 tournaments yesterday while the fifth flight of the massive Millionaire tournament also took place. Keep reading for a complete summary of IOPC Day 13…

It was the first tournament of the day, but it wasn’t the first title for ‘Immortal killer’ this IOPC. Having won a couple of titles in the past, he made sure he had enough to points to maintain the #2 spot on the IOPC Leaderboard, where a brand-new MG Hector car is up for grabs to the winner. Coming back to this tournament, it had a low buy-in of INR 330 and a field of 741 entries played to bring the prize pool up to INR 2,22,300. Immortal killerr found his way through the tournament and claimed his third title of the series, along with INR 43,126 in prize money. In heads-up, he beat Arpan Majhi aka ‘Novus’.

Same guarantee but a different buy-in of INR 880 and once again, the guarantee was taken up to INR 2.4 Lakh because of the field of 300 entries taking part. You just can’t take ‘Immortal killer’ out of the action as he made another deep run here, this time missing his fourth title of the series, and finishing 2nd for INR 37,800. As for the winner ‘JoeyTribbiani’, it was just recently that we reported a victory for this player and now, he walked away with his second title of the series, not forgetting the INR 55,800 top prize that comes with it. An A-T straight did it for JoeyTribbiani in the final hand, beating his opponent’s two pairs.

With a buy-in of INR 2,200, this was the third tournament of IOPC Day 13 on Spartan Poker and here, the tournament halted when we reached the top 5 players. All of them were guaranteed a prize of INR 1,00,000 and because of the high participation of 562 entries, the required prize pool was crossed, and Spartan paid out INR 1,29,260 to EACH of the top five players in this tournament. They were:

Played every Friday night on Spartan, Elite is a special tournament for those who can afford the higher buy-ins in India. Paying INR 11,000 each, we witnessed a field of 362 entries that broke the guarantee and created a fresh prize pool of INR 36.2 Lakh. 39 places shared the prize pool with a min-cash of INR 24,978 each and some of them to make deep runs included Goonjan Mall (17th), Rajat Mahajan (9th) and Siddarth Singhvi (3rd). However, all the name and fame went to the winner ‘Boozar87’ who earned INR 7,25,810 for this finish. Once again, it was Event #62 winner JoeyTribbiani who missed out on another title, finishing as runner-up in IOPC Elite and taking away INR 4,82,546 in runner-up prize money.

A total field of 429 entries played this tournament and this took the prize pool up to INR 8,58,000 which was then shared among the top 39 places with a min-cash of INR 5,920. Hi-Fi was a slightly smaller affair today in terms of prize money and the player to emerge champion here was ‘wolffgupta’ who earned INR 1,72,029 after he beat Gaurav Sood aka ‘mozzie17’ in heads-up. Sood has also been on a great run, winning Summit on PokerBaazi just the previous night. Here, he collected a prize of INR 1,14,371 for finishing second.

360 entries turned up on the fifth flight of the mega Millionaire tournament which also serves as the Main Event of the ongoing IOPC series. This meant another INR 36 Lakh was added to the tournament prize pool and we’re just 60+ entries away from crossing the promised guarantee now. 280+ players have now progressed to Day 2 of the Millionaire on Spartan Poker and from this flight, we have Kanishka Samant aka ‘Wildflower’ who progressed as the chip leader with 243,538 chips.

For all updates on the final 2 days of the India Online Poker Championship, stay tuned to GutshotMagazine.com.