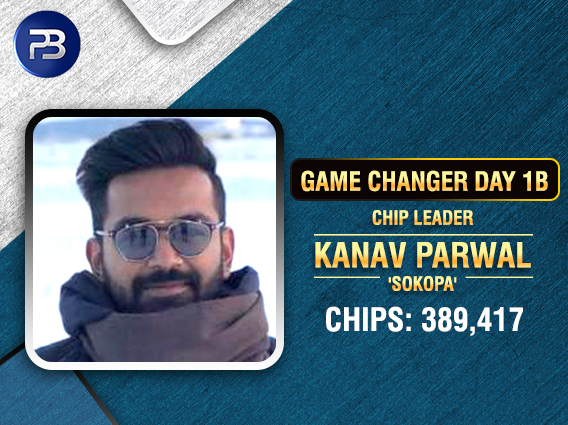 
The biggest online tournament of India just concluded its second starting flight last night. The laudable part is that the third flight is still to go into the books and with just these 2 initial flights, the tournament has gone past its colossal guarantee already.

Game Changer INR 2 Crores GTD, introduced by one of the leading poker websites PokerBaazi saw Day 1B begin yesterday at 8 pm last night. The tournament had only 5 re-entries per person and in all attracted 1,149 entries (including 439 re-entries) on 1B. The turnout was more than Day 1A’s 1,015 entries. The total prize pool of the tournament is now at a whopping INR 2,16,40,000, much larger than the original guarantee. A total of 111 players progressed to Day 2 yesterday.

We spoke to Parwal after the day ended and he had this to say about his experience in the biggest Indian online tournament ever hosted. “Like most of the poker community, I had been eagerly waiting for the Game Changer. It has definitely lived up to the expectations and finishing Day 1B as the chip leader has made things even more exciting. Now, I just hope I can continue the good work on to Day 2 and make it count. Mad props to PokerBaazi for organising a tourney of this stature. Can’t wait to see what else they have in store and hopefully other sites will follow suit as well.“

Coming to the tournament itself, Game Changer surely has “changed” the whole landscape of Indian online poker. What initially was a 2 Crores GTD tournament, might easily one up itself and reach an INR 3 Crores prize pool, subject to Day 1C turnout today. This will be the first time India has seen INR 50 Lakhs given to the 1st place winner in any online poker tournament. And as the guarantee was broken already yesterday, it seems like this amount will receive a major upgrade too.

Game Changer will see its last starting flight Day 1C running today and after a break day on 23rd Feb, the final Day 2 will begin on 24th February. Stay tuned to GutshotMagazine.com as we’ll bring you first updates on this tournament as well as others from around the world.