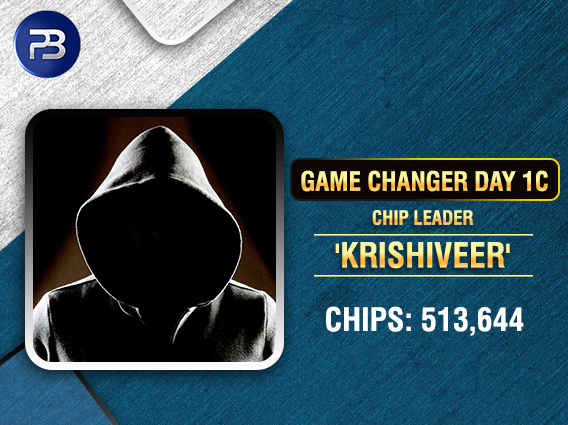 
History was already made on Day 1B of Game Changer INR 2 Crores GTD, where the guarantee was broken already, but yesterday, the biggest online tournament ever hosted in the country just got bigger! Last night’s Day 1C on PokerBaazi attracted the maximum entries out of all three flights and crushed the guarantee by a jaw-dropping amount.

Game Changer Day 1C began at the scheduled time of 8 pm and went in the books exactly after 5 hours, at 1 am today morning. An overwhelming playing field of 1,613 entries (including 745 re-entries) was created, each coughing up INR 11k in buy-ins to play the much-hyped tournament. The day gathered INR 1.613 Crores in prize pool and the total prize pool came to INR 3.777 Crores, a major landmark moment in the country’s poker history.

The day saw Kamal Bhatter aka ‘Krishiveer’ overcoming the tough field to become the chip leader. He bagged 513,644 chips at the end of the day and is overall 2nd in chip lead from all starting flights, 1st being Vikrant Shetty aka ‘Vshetty1’ from Day 1A. 186 players progressed to Day 2 so far, and adding to the previous progressors, Day 2 will see a total of 378 players in contention on PokerBaazi.

The projected first place cash prize of INR 50 Lakhs, which was the biggest first place cash ever awarded in an online tournament, also received a boost in its amount. The player to ship the tourney will now be the content earner of a life-changing figure of INR 60 Lakhs!

Some from previous flights who had less stack also made an entry in Day 1C and are now sitting with a bigger stack entering Day 2. A few knowns out of the 186 who progressed include Vikash Khaitan aka ‘Viki.nse’ (15th) and Varun Gupta aka ‘VnutsG’ (31st), who was running in 1B too but has finished with a higher stack yesterday and will be carrying that forward to Day 2.

Today is a break day for all the players and Day 2 will start tomorrow, 24th Feb at 6 pm in the evening. Stay tuned to GutshotMagazine.com for first updates from the tournament and for general poker news from around the world.