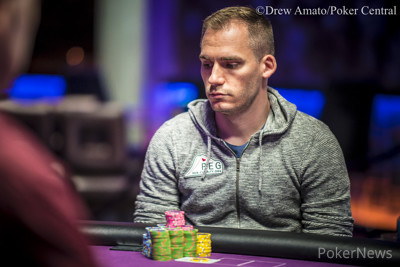 Some of the most thrilling poker hands have been played on the tables at the PokerGO Studio outside the ARIA Resort & Casino, Las Vegas, over the last couple of days. The Super High Roller Bowl is one of the most prestigious poker tournaments in the world and 48 players were given a $300,000 seat into the 2018 edition of this tournament.

‘Kid poker’ Daniel Negreanu expressed determination to win this tournament and he made a brilliant start, topping the chip counts at the end of Day 1, with an overwhelming lead over the rest of the 31 survivors. However, he made a slight slip in the ranks as the final 14 survivors closed out Day 2.

US poker pro and highly accomplished high stakes player Justin Bonomo took the lead at the end of the day, England’s Stephen Chidwick was second in the chip counts, while Negreanu dropped down to fifth. Bonomo has nearly $27 million in live poker earnings, also having recently won the inaugural Super High Roller Bowl China, so it’s not a huge surprise that he’s right at the top.

Chidwick too has been brilliant this year, winning the inaugural US Poker Open Championship and then cashing out for over a million dollars in the SHRB China as well. Third in the chip counts is Seth Davies while Christoph Vogelsang is in fourth place, defending champion of the Super High Roller Bowl. Now you know that some of the best in the business are leading the chip stacks.

The first to get busted on Day 2 was former SHRB winner Rainer Kempe, while Phil Ivey and Jake Schindler busted soon later. A lot was expected from the Spanish High Roller Fedor Holz but he was one of Bonomo’s victims as well, finishing in 19th place. While there are quite a few top pros in the final 14, there’s a very high probability that one of the top five walk away with the 2018 Super High Roller Bowl title.

Keep reading GutshotMagazine.com for daily updates on the Super High Roller Bowl and other poker tournaments from around the world.